Karunaratne, fresh from a match-winning century in the first Test in Galle last week last week, hit six boundaries during his 100-ball stay. 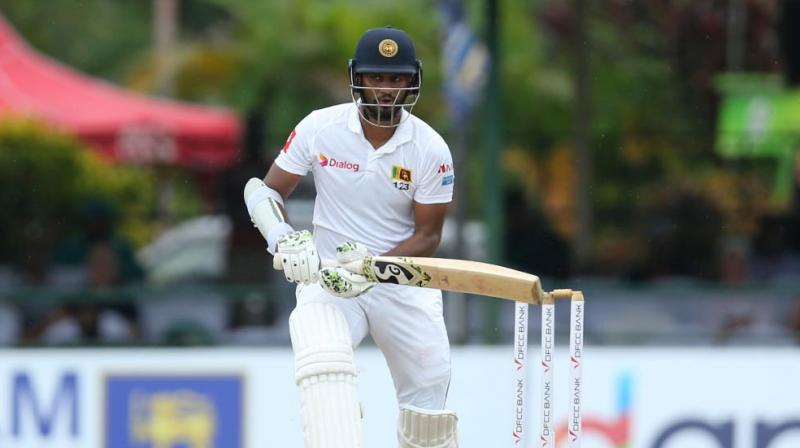 Skipper Dimuth Karunaratne helped Sri Lanka to 85 for two at stumps on a rain-hit day one of the second Test against New Zealand in Colombo on Thursday. (Photo: ICC/Twitter)

Colombo: Skipper Dimuth Karunaratne helped Sri Lanka to 85 for two at stumps on a rain-hit day one of the second Test against New Zealand in Colombo on Thursday. Only 36.3 overs were possible after rain washed out the first session and bad light ended play for the day with Karunaratne unbeaten on 49.

Karunaratne, fresh from a match-winning century in the first Test in Galle last week last week, hit six boundaries during his 100-ball stay in overcast conditions. The left-hander batted with positive intent despite losing opening partner Lahiru Thirimanne and Kusal Mendis either side of tea.

Thirimanne never looked comfortable and his 59-minute stay at the wicket produced just two runs. His misery ended when he pushed a William Somerville delivery and was caught at extra cover by skipper Kane Williamson. He had been earlier dropped by wicketkeeper BJ Watling off Somerville.

Mendis looked good as he reached 32 with four fours and put on 50 runs with Karunaratne to steady the batting. Colin de Grandhomme, who made the XI in place of Mitchell Santner, got Mendis caught behind on a seaming delivery outside the off stump and Watling gloved the catch.

Former captain Angelo Mathews joined Karunaratne in the middle to remain unbeaten on nought after facing 14 deliveries. The hosts only need a draw to clinch the two-match series. Both teams made one change from the first match. Sri Lanka included veteran spinner Dilruwan Perera in place of Akila Dananjaya, who was reported for a suspect bowling action after the first Test.

The entire opening session and another hour was lost due to persistent rain and the toss took place at 1:10 pm (0740 GMT). The afternoon session went uninterrupted but play was again delayed by 28 minutes after tea due to rain. After 7.3 overs in the evening session, play was called off due to bad light. Play will resume on day two 15 minutes before schedule at 9:45 am (0415 GMT).