The chinaman bowler joined the likes of Chetan Sharma and Kapil Dev in a select club of Indians who have picked up a hat-trick in ODIs. 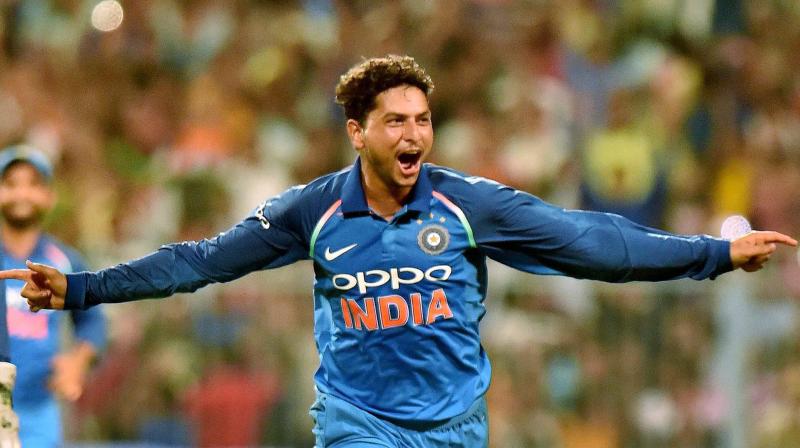 Kuldeep's mother Usha Yadav, however, said she was very upset at the beginning because Kuldeep was not getting any wickets. (Photo: PTI)

Kanpur: Left-arm spinner Kuldeep Yadav on Thursday scripted history as he became the third Indian cricketer to take a hat-trick in ODIs. Kuldeep achieved the feat in the 33rd over of the Australian innings during the second match of the ongoing series which India went on to win by 50 runs.

The chinaman bowler stunned Aussie batsmen with his guile as he dismissed Matthew Wade, Ashton Agar and Pat Cummins on successive deliveries to join the likes of Chetan Sharma (1987) and Kapil Dev (1991) in a select club of Indians who have picked up a hat-trick in ODIs.

The 22-year-old from Kanpur also became the first Indian spinner to take a hat-trick in 50-over format of the game.

Jubilant with Kuldeep's achievement, his youngest sister Anushka Singh Yadav said that the entire family was feeling extremely proud of him.

"I am feeling really good that my brother has played so well. We all were waiting for this moment and it happened," Anushka told ANI. "Though he did not start well, but we knew in our hearts that he will do something special today," she added.

His mother Usha Yadav, however, said she was very upset at the beginning because Kuldeep was not getting any wickets.

"It is such a proud moment for me as a mother. I got really upset when he was not getting any wickets," she said with teary eyes.

"I did not watch the match for sometimes and went to pray. And, he did what I prayed for him," she added.

Kuldeep's father Ram Singh said, "At first I was really upset, but it finally worked out well. Whenever he bowls he gets out results in first 2-3 overs but today he had to fight for it."

It was not the first time that Kuldeep took a hat-trick for his country. He had become the first Indian to take a hat-trick in the U-19 World Cup, achieving the feat against Scotland in the 2014 edition.