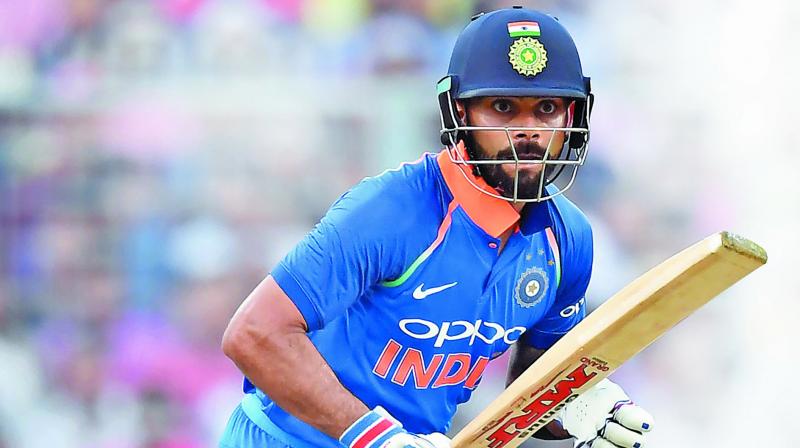 Virat Kohli in action in the second ODI against Australia at Eden Gardens in Kolkata. (Photo: AFP)

Yadav once again combined with leg-spinner Yuzvendra Chahal to dismiss the visitors for 202 in 43.1 overs while chasing 253 and earn India a 2-0 lead in the five-match series.

The third match in scheduled on Sunday in Indore.

Earlier, captain Virat Kohli and Ajinkya Rahane struck sublime half-centuries before Australia made a strong fightback to bowl India out for 252.

Coming on to bat after the early dismissal of Rohit Sharma, Kohli (92) looked in great touch and along with Rahane (55) shared 102 runs off just 111 deliveries for the second wicket to set the base for the total.

Kohli laced his 107-ball knock with eight boundaries, while Rahane hit seven fours during his 64-ball innings.The time Kohli and Rahane were at the crease India were on course for a big score but the latter’s dismissal in the 24th over opened the gates for Australia.

The visitors forged a brilliant fightback with medium pacers Nathan Coulter-Nile (3/51) and Kane Richardson (3/55) sharing the spoils on a slow Eden Gardens wicket.

Pacer Pat Cummins (1/34) and left-arm spinner Ashton Agar (1/54) also picked up a wicket each for Australia.

Brought in place of James Faulkner, Richardson picked up the key wickets of last match heroes Mahendra Singh Dhoni (5) and Hardik Pandya (20) as India were bowled out in the last ball of the innings after they comfortably placed at 186 for three in 35 overs.

Despite Rahane’s run out, Kohli looked in full flow and along with Kedar Jadhav, who made a run-a-ball 24, added 55 runs for the fourth wicket.

However, Coulter-Nile’s twin strikes (Jadhav and Kohli) in successive overs titled the balance in favour of Australia as thereafter India just seemed to have lost the plot.

Kohli played on to be denied his 31st ODI century, while Jadhav, while attempting a cut, was holed up by Glenn Maxwell.

With 15 balls remaining in the innings, a passing shower held up the game for 18 minutes with India placed at 236 for 7.

There was also an injury scare for Pandya, who was hit hard on the grill of his helmet by a shot from Bhuvneshwar Kumar. Such was the impact that Pandya lay on the ground as the Aussies also rushed on to him.