Rahane is doing what is in his hands: Amre

Rahane has been at the forefront of the dominance from Mumbai top order, giving a dream start to Vinayak Samant as the coach. 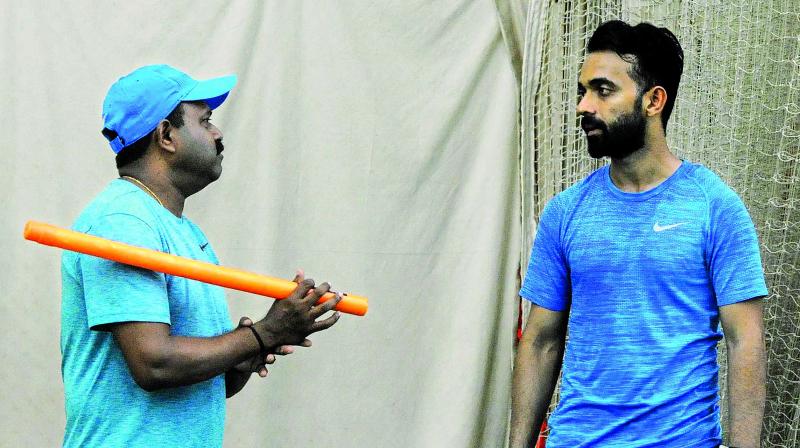 Mumbai top order has been firing all cylinders in the ongoing Vijay Hazare Trophy in Bengaluru. It has been just two matches but Ajinkya Rahane-led side has dismantled top opponents Baroda in first match by nine wickets and defending champions Karnataka by 88 runs at M. Chinnaswamy Stadium in Bengaluru on Friday.

Rahane has been at the forefront of the dominance from Mumbai top order, giving a dream start to Vinayak Samant as the coach. Mumbai chased 239 in 43 overs against Baroda and on Friday scored massive 362/5 against Karnataka on the back of hundreds from Rahane (148) and Shreyas Iyer (110). The experienced duo put on 216 runs for the second wicket.

Such has been Mumbai’s dominance that Rahane and Iyer have scored a half-century and century each already while Prithvi Shaw scored half centuries in both the matches. The middle-order batsmen are yet to get a fair chance in the tournament.

Opening the innings, Rahane has been a calming influence from one end when Shaw has got it going in both the games, and then has stepped on the accelerator in company of Iyer. He has been involved in century stands in both matches with Shaw and Iyer to give uplift to Mumbai innings.

Incidentally, both Rahane and Shaw were part of Indian Test squad in England and joined the team right away after returning home. Rahane has been overlooked for the Indian limited-overs team since South Africa tour in February and seems to be on a mission along with Iyer who was also dropped for the Asia Cup. This is benefiting Mumbai cricket at the moment.

“It is in our system, when you are not in the (Indian) team, you go back to domestic cricket, do some fine-tuning, get runs behind you. In the last match he remained not out (on 79) and today he scored hundred. He is going there and performing with same dedication and passion for himself and his team,” said former India batsman and Mumbai coach Praveen Amre who is also the personal coach of Rahane.

“Mumbai needed that good start and as a captain he is doing well. He is doing what is in his hands and rest is in the selectors’ hands,” Amre added.

Rahane has been the  Vice-captain of the Indian Test team and has also led against Afghanistan in the absence of Virat Kohli, but he hasn’t been a certainty in playing XI. He was dropped for the first two Tests during the South Africa series, only to play in last Test at Johannesburg and help India win by top scoring with 48 in the second innings in a low scoring match.

He didn’t do well in one-off Test against Afghanistan and had an ordinary series in England where he made 257 runs in 10 innings with two half centuries.

“He played only third Test in South Africa and helped his team win. In England, with an exception of Virat Kohli (593 runs) which was special, everyone including England batsmen were struggling. Yes, he could have done better, but actually it was a  par performance as it wasn’t that easy for batsmen in England,” he said.

Rahane will be itching to do well in Tests against West Indies in the upcoming series and also try to make a comeback in one-dayers.

“The last time he played an ODI in South Africa, he helped his team win by getting involved in big partnership with Virat Kohli. It all about experience now, as a batsman he has over 3000 Test runs. He has matured after playing in 9-10 first class seasons. In England, it was important for him to score 250 odd and be in the team. He takes one series at a time, and against West Indies, he will be keen to perform as it will count before going to Australia,” he said.