What does Rishabh Pant do from here?

Shastri warned Pant he would get a ‘rap on the knuckles’ if he doesn’t cut out the flagrancy in his approach to batting. 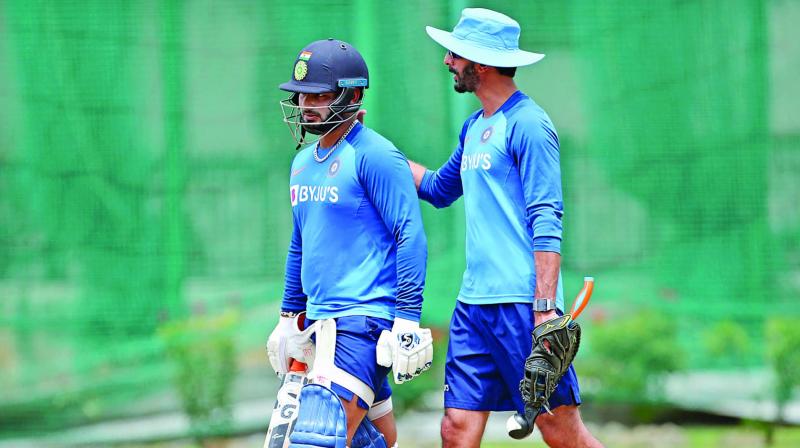 Going by what chief coach Ravi Shastri and skipper Virat Kohli said in an interview to Star Sports before the T20 series against South Africa, young Rishabh Pant’s place in the Indian team could be getting wobbly after his disappointing batting in the West Indies

Shastri warned Pant he would get a ‘rap on the knuckles’ if he doesn’t cut out the flagrancy in his approach to batting. Kohli was a tad milder, advising Pant to improve on his shot selection. Whatever the tonal difference, the missive from both the coach and captain, was the same: Young man, better shape up, and quickly!

However, I also see a second angle to what Shastri and Kohli had to say about Pant. This is located in their own concern in how to build up strategies and find the best personnel to win the T20 World Championship as well as the World Test Championship over the next two years.

Pant is integral to that ambition (so far). There is little dispute that he is ‘a special talent’. That much has been evident from his under-19 days, the few seasons he’s had in the IPL as well as his brief career yet at the international level. But such descriptions must find relevance beyond being just an ego-booster for a player.

Gifted youngsters when they arrive on the scene fill the environment with excitement. They are generally unburdened by the pressure of expectation, keen to establish their credentials and express their skills in an unbridled, delightful manner.

However, precocity in an individual — and particularly so in sports — can’t be an end in itself. In fact, it is only a promise that must find actualization — and within a certain time frame — for it to have any worthwhile meaning and not end up as a chimera.

This requires consistency to be closely aligned with talent. An inconsistent performer, however talented, will not be seen of long-term value. Why, the player could end up becoming a liability even in the medium term. This is where, one reckons, Shastri’s and Kohli’s anxieties about Pant emerge.

As yet, they have been his ardent supporters. They’ve backed him in every format, whether or not he’s found place as wicket-keeper. For instance, when Shikhar Dhawan got injured during the World Cup, his replacement was not an opener, but Pant who had been surprisingly excluded from the original squad.

But such support is never unconditional. The value proposition of any player has to be of mutual advantage to the team management. When this equation starts getting skewed, compunctions as raised by Shastri and Kohli recently are only inevitable.

What does Pant do from here? The solution is not in tempering natural aggression — which could be disastrous as also upsetting the team’s current gameplan — but putting a premium on his wicket to deliver greater value to himself and the team.

There is no specific formula to achieve this, but what it certainly needs from Pant is to be less self-indulgent. This means becoming a better reader of match situations, make greater effort to understand what rival captains and bowlers are planning rather than just relying on gut instinct and a devil-may-care approach.

Of course, he is still very young. But at the elite level in sport, it has now become incumbent on athletes to mature quickly to make optimize their potential. This also entails realising the threat from internal competition that could scuttle their career.

Veteran Wriddhiman Saha, whom Pant replaced in the Indian Test team when the former got injured, has staged a comeback. Pant still has a few years left in him. MS Dhoni remains enigmatic about his future, but there is no indication that Pant would be preferred to him in white ball cricket.

Moreover, there are sundry other rivals too in his age group ambitious about representing India as wicket-keeper batsmen in different formats, among them Ishan Kishan and Sanju Samson, who have been impressive over the past couple of seasons.

Pant has a string of fine performances to his credit too in the past couple of years, including two overseas Test centuries. But while these make him the frontrunner still among wicket-keeper batsmen in Indian cricket, he has competition creeping up on him. Pant would ignore this at his own peril.