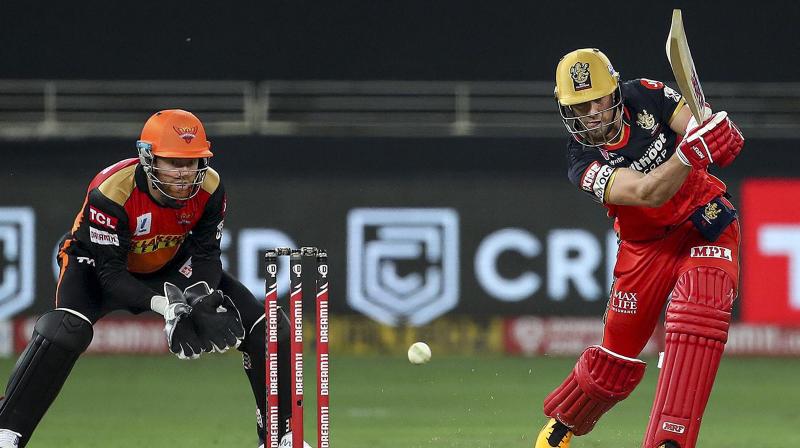 Royal Challengers Bangalore batsman AB de Villiers plays during a cricket match of IPL 2020 against Sunrisers Hyderabad, at Dubai International Cricket Stadium, Dubai, United Arab Emirates, Monday, Sept. 21, 2020. It was being speculated that De Villiers will come out of his retirement to play for South Africa in the T20 World Cup but the tournament, which was to be hosted by Australia this year, was postponed due to COVID-19 pandemic. (Photo | PTI)

Dubai: South African batsman AB de Villiers says he pleasantly surprised himself by striking form in his very first IPL game after being out of action for nearly eight months.

It was his first competitive T20 game since he played for Brisbane Heat during the Big Bash League in January this year.

“I surprised myself to be honest. We had a competitive game in South Africa (unrecognised 3TC), which was great, gave me a little bit of confidence,” de Villiers, who retired from international cricket in 2018, said after RCB beat SRH by 10 runs here.

“As a 36-year-old to come here, having not played a lot of cricket, in the middle of some talented youngsters - was a pleasing start. Very happy with the basics, seems to be in place,” he added.

It was being speculated that De Villiers will come out of his retirement to play for South Africa in the T20 World Cup but the tournament, which was to be hosted by Australia this year, was postponed due to COVID-19 pandemic.

De Villiers singled out opener Devdutt Padikkal, who smashed a fifty on debut, for special praise and said that the young talents on display in the IPL are “incredible”.

“Padikkal is a shy and quiet guy but I don’t have to say much really, he looks like a really good talent.

“It’s a tough thing to arrive at the IPL, they don’t come more tough than that. The talent is just incredible. Every year there are 19 and 20-year-olds coming through looking like they’ve played international cricket for a long time,” he added.