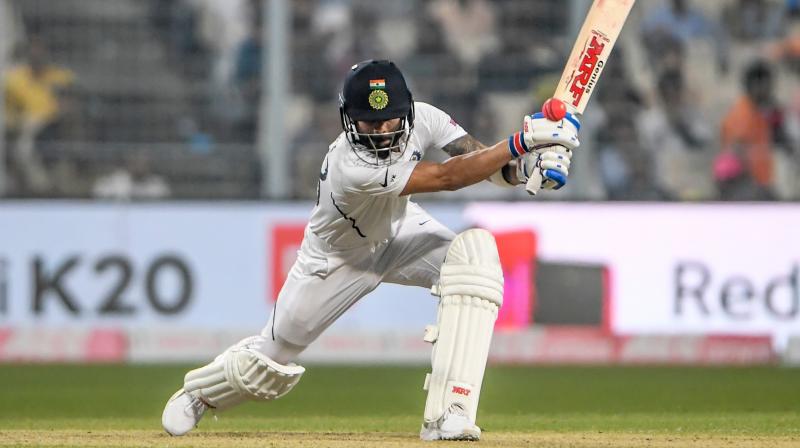 This is India's as well as Bangladesh's first-ever day-night Test. (Photo: AFP)

This is India's first-ever day-night Test. Bangladesh, too, is playing its first D/N Test match. The pink ball will be used during the entirety of the match.

Stumps Day 1: India finishes day 1 with a lead of 68 runs over Bangladesh. The Indian batsmen scored 174 runs at the loss of 3 wickets. Virat Kohli top-scored with a magnificent 59 runs. He was ably supported by Cheteshwar Pujara, who himself scored 55 runs.

Day 2 presents itself with a bright chance for Virat Kohli to stamp his authority in Test cricket. It is predicted that tomorrow also will be a day for Bangladesh to forget and for India to rejoice. Pink ball has shown how it does behave and the seamers will be having a field day with it.

39.5: Fifty! Captain Kohli hits his 23rd half-century. It has been a fantastic innings as he helped rescue India from a tough situation. He achieved his fifty in style as he hit a four through midwicket and it has come off just 76 balls.

39.1: Out! Cheteshwar Pujara succumbs to Ebadat Hossain. He was at 55 when he lost his wicket. Created a great partnership with Virat Kohli but unfortunately got out to a beautiful short of length delivery. Catch was taken by Shadman Islam at second slip.

35.5: Fifty! Cheteshwar Pujara hits his 24th half-century. His innings consists of 8 fours. He has been steady throughout the match today and that is a well-deserved fifty.

27.4: India goes past the target of 106 set by Bangladesh. Despite a few early hiccups in the form of Mayank Agarwal and Rohit Sharma's wickets, Kohli and Pujara have held strong to keep the Bangladeshi bowlers from doing more damage. The duo has kept up a fine partnership and will try to keep it going to ensure India's upper hand is wide enough.

Most Test runs as captain

22.5: Four! Virat Kohli hits a four towards long-on. It was a perfectly hit shot through the middle of the bat as it raced towards the boundary line. Kohli and Pujara are striking a very good partnership between the two of them and it seems to be like the setback incurred by Rohit Sharma's wicket is not having a major impact.

12.5: Out! Rohit Sharma loses his wicket. An Ebadat Hossain ball finds its way to Rohit's pads after he fails to judge the ball. The umpire lifts his finger but Rohit Sharma is not too happy with it and decides to review the decision. Upon review, the ball was found to be touching the bails and as a result, the decision was not overturned. Luckily, India did not lose their review.

Tea break: Time to take a rest for India and Bangladesh. Rohit Sharma was handed a lifeline by Al-Amin Hossain after the latter dropped his catch at the boundary line. Earlier, Mayank Agarwal fell victim to Al-Amin, but ever since then, the duo of Sharma and Pujara have done well to keep the Bangladeshi bowlers at bay. Let's see if the Indians continue the same or whether the Bangladeshis overcome the odds to see off the Indian batting lineup.

A galaxy of Indian stars both present and former greats take a lap of the Eden Gardens on this historic moment of India's first-ever #PinkBallTest #INDvBAN #TeamIndia pic.twitter.com/2qM5iaw0SI

11.1: Dropped! The dangerous Rohit Sharma is dropped by wicket-taker Al-Amin on the boundary line. How costly will this drop turn out to be for Bangladesh? It was a sitter and Al-Amin had all the time in the world. But, turns out it is Rohit Sharma's day after all.

4.4: Out! Mayank Agarwal becomes the first Indian victim. Falls down to a short of length delivery by Al-Amin. A rare lapse in concentration displayed by Agarwal, which ultimately cost him his wicket. Mehidy Hasan takes his catch at the gully.

Innings break: Bangladesh was at the receiving end throughout their innings as the Indian seamers made a meal out of their batsmen. The pink ball seems to favour the seamers a lot as seen in the valiant display put on by the Indian bowlers. The spinners were non-existent as they were not allowed to have any impact on the game.

A pumped up @ImIshant after he picks up his 5-wkt haul in the #PinkBallTest.#TeamIndia pacers have bowled out Bangladesh for 106 runs in the first innings. pic.twitter.com/Z3k0yvEwlM

It is left to be seen if the pink ball will favour the Bangladeshi bowlers as much as it did to the Indian bowlers. The onus will be on Rohit Sharma and Mayank Agarwal to start leading India from the front.

30.3: Wicket! It is all over for Bangladesh as they fall to a lowly 106. Shami takes the last wicket of Abu Jayed. And with that, the first innings of the much-hyped Day-Night Test comes to an end.

27.6: Wicket! Ishant Sharma claims another wicket. Concussion substitute Mehidy Hassan caught by Cheteshwar Pujara over at mid-wicket. Seems like no one was aware of the catch and a result the catch was referred upstairs for the third umpire to confirm. It was a legal catch after all.

23.5: Wicket! Ishant Sharma takes his third victim. This time it is Ebadat Hossain as he falls after scoring just one run. Ishant swipes away the stumps. Bangladesh are now crumbling and seven wickets down.

21.5: Bangladeshi batsmen Nayeem Hasan and Ebadat Hossain walk in to brace the Indian onslaught with the hopes of a Bangladesh revival. Liton Das had to retire hurt after he suffered a blow to his helmet thanks to a bouncer by Mohammed Shami early on.

Lunch break: A bad, bad session for the Bangladeshi batsmen as the pink ball seems to be working in favour of the Indian seamers. Umesh Yadav was the pick of the bowlers as he took three important wickets. Ishant Sharma and Mohammed Shami too have had their share of wickets with them taking two and one wickets respectively.

The session also did not have any dearth of drama as both the teams lost a review each on simple decisions. The pink ball surely did create waves in its first time in India. We will have to wait and watch if India does get to bat on the very first day itself, which is very possible considering that Bangladesh just have four wickets left.

Legends reunite on a historic day in Indian Cricket.#PinkBallTest pic.twitter.com/9RUEEtzKBq

19.4: Wicket! Wriddhiman Saha takes a stunning catch of Mahmudullah Riyad. Ishant Sharma's straight delivery is nicked by Mahmudullah towards Saha, who stretches to his limits to take a blinder. Mahumudullah edged it straight behind him.

With this wicket, Wriddhiman Saha has now joined the elite list most dismissals by an Indian wicketkeeper in Tests. He now has 100 Test dismissals to his name. Mahendra Singh Dhoni tops the chart and is followed by Syed Kirmani, Kiran More and Nayan Mongia.

14.2: Wicket! The well-set Shadman Islam departs at 29. Bangladesh have now lost half their side. Caught behind the wicket by Wriddhiman Saha. Shadman attempted an unsure poke and nicks the ball behind to the waiting Saha.

11.5: Wicket! Mushfiqur Rahim falls and so does Bangladesh's best bet at a revival. Rahim tries to defend a Mohammad Shami length delivery but fails miserably as the ball rolls towards the stumps.

10.3: Wicket! Umesh Yadav strikes twice in one over. Mohammad Mithun becomes the latest Bangladeshi batsmen to get out. Yadav strikes the timber as Mithun fails to get anything on the ball.

7.2: Review lost! India lose their first review. Correct decision by the umpire. Shadman Islam is caught behind the wicket by Wriddhiman Saha and the Indian players appeal. The umpire didn't go in India's favour, which forces Virat Kohli to take the review. Now India have one review left.

6.1: Wicket! Imrul Kayes gets dismissed by Ishant Sharma. He trapped in front of the wicket. Bangladesh sought to overturn the umpire's decision by taking their first review unsuccessfully. Bangladesh now have only one review left.

Shadman Islam and Imrul Kayes come in to bat for Bangladesh.

Mominul Haque: We will bat first, the wicket is dry and hard, so that's why we want to bat first. It's a brave decision we feel. It's a great opportunity for everyone. Two changes for us. Al Amin comes in place of Taijul and Nayeem Hasanin for Mehidy Hasan.

Virat Kohli: We would have batted first as well. Decent grass cover on it, but it's a hard pitch. With the pink ball there will be something for the first 15 overs. This is another opportunity for us to come and execute our skills. The challenge is to adapt quickly to the ball. It travels fast and it's difficult to control. We are fulfilling a responsibility of debuting with the pink ball. After the set of legends we have had, I think it's our responsibility that we are doing right. We are setting the right examples. Proud to have this opportunity to do so. We have the same team from the first Test.