Irani Cup: Rest of India fight back but Gujarat in command

At stumps, Gujarat were 227/8, ahead of Rest by an overall margin of 359 runs with two wickets in hand at the Brabourne Stadium. 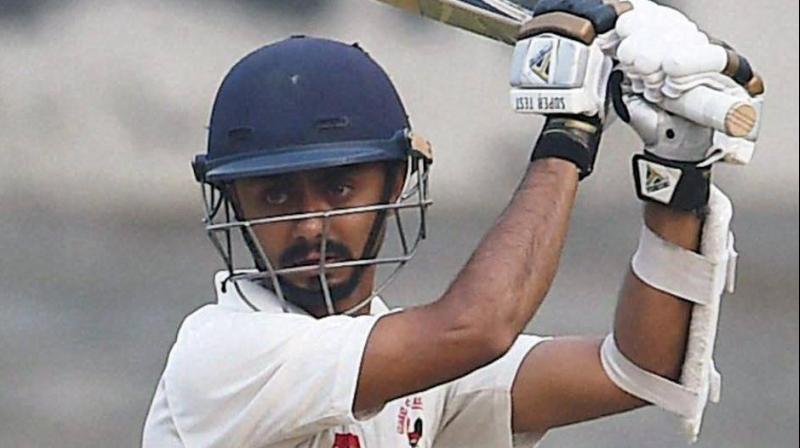 Chirag Gandhi scored an unbeaten 55 as Gujarat took an overall lead of 359 against Rest of India in the Irani Cup. (Photo: PTI)

Mumbai: Rest of India fought back well after conceding a 132-run first innings lead to Gujarat, but the newly crowned Ranji Trophy champions maintained the upper hand at the end of the third day of the five-day Irani Cup match on Sunday.

At stumps, Gujarat were 227/8, ahead of Rest by an overall margin of 359 runs with two wickets in hand at the Brabourne Stadium, with left arm orthodox slow bowler Shahbaz Nadeem being the pick of the Rest bowlers with excellent figures of 4/53 from 23 overs. The unbeaten Gujarat batsmen at the crease were first innings century-maker Chirag Gandhi (55), after a stay of 142 minutes in which he struck seven fours, and no. ten batsman Hardik Patel (0), after a stay of 23 minutes.

Prolific opener Priyank Panchal led the way with a patient 73 in 212 minutes for Gujarat after the early fall of his partner Samit Gohil to Pankaj Singh. The twin dismissals of Panchal, who faced 135 balls and hit nine fours, to Siddharth Kaul, and captain Parthiv Patel for 32, unfortunate to be given out caught off the pads by umpire Virendra Sharma prompting the batsman to keep glancing behind on his way back, helped Rest keep things tight.

These two batsmen put on 85 runs for the third wicket in quick time before departing in close succession. Gandhi then took over the senior’s role to keep the innings afloat with the lower order for company. He followed up his first innings 169 with his second innings half century and had faced 96 balls without being dismissed. Hyderabad speedster Mohammed Siraj, who was called up as a late replacement for the injured Shardul Thakur, worked up appreciable pace to pick up two wickets, including that of Manpreet Juneja who was fed short balls and then a wide, fuller one that he reached out for and edged behind.

Seasoned Nadeem gave a good account of himself by varying his pace and flight, besides using the arm ball well to pick up four scalps, those of Parthiv, Karan Patel and Mohit Thadani, who too was not happy with the decision of umpire Sharma to declare him out caught at slip to a full length ball, and Gaja. First innings bowling heroes Pankaj Singh and Kaul got a wicket each although the former bowled quite well and was not fortunate enough to snare more.