Mitchell Starc powers Australia to 256/9 after being reduced to 205/9 on Day 1 of the opening India-Australia Test. 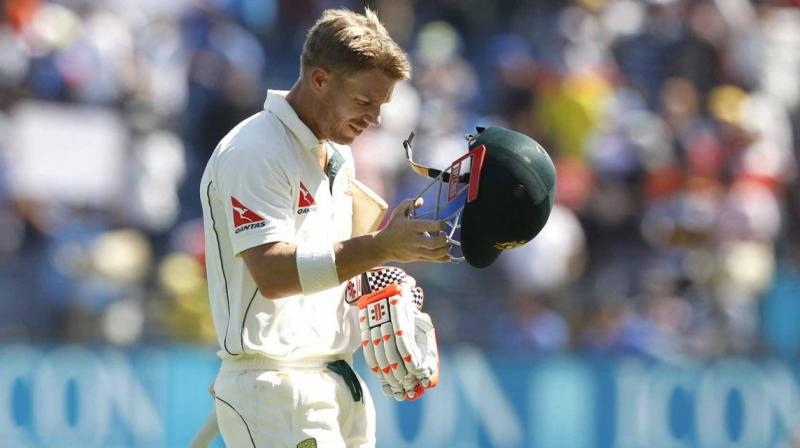 Australia lost David Warner a few minutes before the lunch break after he dragged a ball onto his stumps off Umesh Yadav’s bowling. (Photo: BCCI)

Pune: Mitchell Starc smashed an unbeaten 57 to lift Australia to 256 for nine at stumps on the opening day of the first Test against India in Pune on Thursday.

Starc put on 51 runs in a 10th wicket partnership with Josh Hazlewood, who made just one, to thwart the Indian bowling attack, which had reduced the visitors to 205-9.

Matt Renshaw, who overcame a stomach bug which forced him to retire hurt mid innings, remained the top-scorer with his gritty 68 while India's Umesh Yadav claimed four wickets.

Indian spinners pegged back Australia in the second session as Virat Kohli and Co started to make the most of the spinner-friendly pitch on day one of the opening Test at the Maharashtra Cricket Association Stadium.

Jayant Yadav, R Ashwin and Ravindra Jadeja scalped a wicket each in the second session after Australia put on a solid fight, losing only David Warner off Umesh Yadav, in the opening session.

Matt Renshaw, who had earlier retired ill, scored an impressive fifty in his first game in India. He though fell off Ashwin's bowling after scoring 68 as Murali Vijay took a good low catch in the slips.

Umesh then scalped two wickets on two consecutive deliveries as Stephen O'Keefe, who was brilliantly caught by Wriddhiman Saha, and Nathan Lyon got for zero. India had a chance to wrap up Australian innings after they were reduced to 205 for 9. However, Starc and Hazlewood made sure that Australia did not fold out on day one before stumps.

Earlier, Umesh gave India their first breakthrough after he dismissed David Warner in the first session as Australia scored 84 runs for the loss of a wicket before lunch. Australia had to deal with Matt Renshaw's return to the dressing after he complained of upset stomach.

While Steve Smith and Shaun Marsh made sure Australia did not lose any more wickets in the first session, Jayant Yadav broke the partnership as he struck early in the second session to remove Marsh.

Just when Smith and Handscomb looking good to go on and forge a big partnership, Jadeja got Handscomb out LBW. Ashwin then scalped the big wicket of Smith as India went into tea break on a bright note.

Warner and Renshaw made solid starts as Australia kept India at bay in the first 75 minutes of the play. While the Australian openers had their share of nervous moments, they managed to trouble the Indians who were looking for early wickets on a pitch that offered a lot of help to spinners.

Earlier, Australia put on an impressive show to deny India a chance to run through their batting line-up.

Australia will bat first as India field three-man spinners in the first Test here on Thursday.

Steve Smith did not hesitate a bit as he elect to bat on the pitch that will assist the spinners from day one. While Indian skipper Virat Kohli said that India would have liked to bat first had they won the toss, it won’t be a bad idea to let R Ashwin, Ravindra Jadeja, and Jayant Yadav have a crack at the Australians in the first hour of play.

"It's a very dry pitch, won't bounce. Looks different to the T20 games I've played here," Smith, who plays for the Rising Pune Supergiants in the Indian Premier League, said at the toss.

"Our preparations have been great, about executing our skills under pressure," Smith said of the much-anticipated four-match series.

"I don't come to the toss expecting anything. These things you have to keep out of contention. Looking at it as a challenge ... Reverse swing will be a big factor," said Kohli.