Testing time for Aussies on tour to India

India look to continue their incredible home run as the series-opener kicks off today. 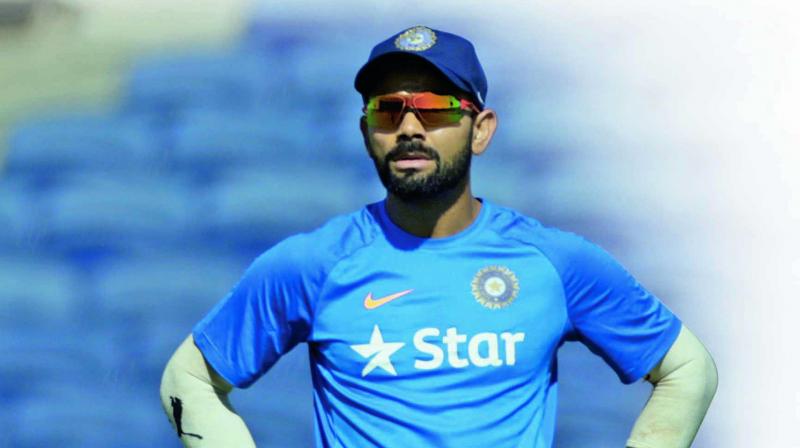 .The skipper has been instrumental in India’s bullish run, plundering runs and punishing bowlers.

Pune: In-form India will look to carry on their home dominance when the four-match Test series against Australia begins here on Thursday. Of the nine matches they have played at home this season, they have won eight and drawn one. But the staggering statistics is Virat Kohli & Co’s unbeaten streak of 19 games.The skipper has been instrumental in India’s bullish run, plundering runs and punishing bowlers. The spin duo of R. Ashwin and Ravindra Jadeja have made life difficult for the opposition batsmen on dry and slow wickets. Ashwin, in particular, has proved lethal and made a habit of breaking records in every series.

The Aussies have to be wary of the off-spinner, who recently became the  quickest to reach 250 Test wickets. Fast bowlers have also chipped in with crucial breakthroughs while top-order batsmen Murali Vijay, K.L. Rahul and Cheteshwar Pujara have provided a solid platform which the likes of Kohli and Ajinkya Rahane have made optimum use of. Wriddhiman Saha, Ashwin, Jadeja and Jayant Yadav ensure India bat deep when the situation demands. In contrast, not quite the powerhouses they once were, Australia are in unfamiliar territory.

They had lost 0-4 during their last tour to India and were blanked 0-3 by Sri Lanka on their previous tour to Asia. Australia thus have their task cut out though they seem better prepared this time after training for two weeks in Dubai and then warming up with a three-day game in Mumbai. They have left-handed opener David Warner in the form of his life and skipper Steve Smith has been consistent.Smith has always excelled against India.

Pune is hosting its first ever Test match. The pitch will be a bit of mystery to both the sides. Curator Pandurang Salgaoncar expects some bounce and lateral movement. India are likely to make at least one change in the playing XI from the last Test against Bangladesh.Off-spinner Jayant Yadav may come in to bolster the spin department. Left-arm chinaman Kuldeep Yadav may also get a look in.

Australia have three spinners in their squad — left-arm spinner Steve O'Keefe, off-spinners Ashton Agar and their mainstay Nathan Lyon.Glenn Maxwell can also be handy with the ball.Smith has hinted that Aussies could play three spinners.Pacer Josh Hazzlewood could miss out.