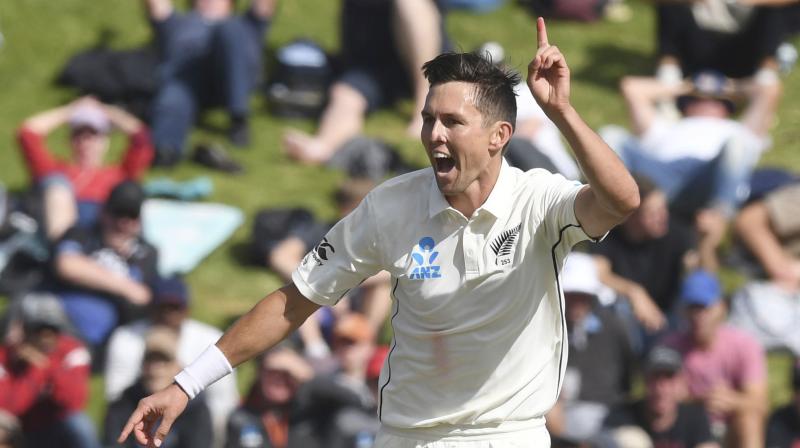 Faced with a 183 run first-innings deficit, India were 144 for four at close, still 39 in arrears after a rollicking innings by Boult and Kyle Jamieson had pushed New Zealand to a total of 348.

Ajinkya Rahane was unbeaten on 25 with Hanuma Vihari on 15.

Boult, back in Test cricket after breaking a hand during the Boxing Day Test in a disastrous series for New Zealand in Australia, took a back seat in India's first innings when Jamieson and Tim Southee took four wickets apiece to bowl out the tourists for 165.

But he came to the fore on day three with figures of three for 27 as India, the world's top-ranked side, looked lost in New Zealand conditions.

The tourists needed patience and determination as they worked to write off the deficit in the 65 overs they faced before stumps.

After Prithvi Shaw fell early, caught by a diving Tom Latham at backward square leg to give Boult his first wicket, Mayank Agarwal and Cheteshwar Pujara cautiously lifted the score to 78 for one.

But Pujara, who received loud applause when he ended a 28-ball drought with a two off Boult, was bowled by the New Zealand quick on the last ball before tea.

Agarwal went for 58 soon after the resumption and India were reduced to 96 for three.

This put pressure on Virat Kohli to perform after a string of low scores in New Zealand but on 19 his patience deserted him and a wild swing at a short Boult delivery was nicked to the keeper and India were 113 for four.

India had their opportunities to clip New Zealand's wings.

They opened the day with two wickets in the first three overs to have New Zealand 225 for seven, just 60 runs ahead.

But lusty hitting from Jamieson and then Boult paved the way for the final three wickets to add a further 123 runs.

Jamieson, only selected for his maiden Test while Neil Wagner is on paternity leave, followed up his four for 39 with an entertaining 44 off 45 deliveries with the bat when the New Zealand innings was teetering.

He blasted four sixes in the whirlwind knock and was caught going for a fifth having put on 71 with Colin de Grandhomme for the eighth wicket.

The run-a-ball innings was a record for a New Zealand number nine on debut eclipsing the 43 by Graham Vivian, also against India, 55 years ago.

De Grandhomme produced a more sedate 43 before Boult scored all 38 runs off 24 deliveries in the last wicket stand with Ajaz Patel.

Ishant Sharma was the most successful of the Indian bowlers with five for 68 while Ravi Ashwin took three for 99.