Not sure if Kohli knows how to spell 'sorry': Cricket Australia CEO

James Sutherland, Cricket Australia CEO, took a dig ahead of the 4th India-Australia Test in Dharamsala. 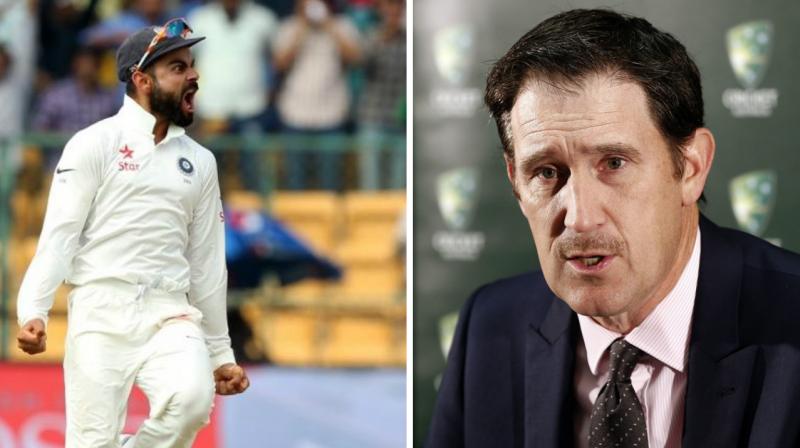 "I'm not sure he (Virat Kohli) knows how to spell the word (sorry) but perhaps at the end of this long and cut-throat series let's hope the boys can come together and have a bit of a laugh and reflect on that," said Cricket Australian CEO while mocking Virat Kohli. (Photo: BCCI / AP)

Adelaide: Taking a cheeky dig at Virat Kohli, Cricket Australia's chief executive James Sutherland said that he is not sure whether the Indian skipper knows how to spell the word "sorry".

While talking to a radio station in Adelaide, Sutherland was asked if the 28-year-old Indian captain should issue an apology to Steve Smith for accusing the Australian side of systematically rotting the Decision Review System (DRS) during the drawn second Test in Bengaluru.

In response, Sutherland mocked, "I'm not sure he knows how to spell the word (sorry) but perhaps at the end of this long and cut-throat series let's hope the boys can come together and have a bit of a laugh and reflect on that."

Emotions flared once again between Kohli and Steve Smith after the Australian skipper tried seeking a clue from the dressing room for a DRS call after his dismissal on Day Four of the second Test at the M Chinnawamy Stadium.

The incident took place in the 21st over of the Australia's second innings when Smith was trapped LBW by pacer Umesh Yadav, a delivery that went underground and struck the former just above his left boot in front of middle stump,cricket.com.au reported.

Having already blown a DRS call, involving David Warner, the Australians were in a fix on whether to seek another for Smith.

The Australian skipper first turned to non-striker Peter Handscomb's end to discuss the merit of reviewing umpire Nigel Llong's decision but were quickly denied a referral when the latter spotted both the batsmen looking in the direction of the dressing room.

In the post match press conference, Kohli stopped short of calling Australia `cheat` but his message was clear and it also prompted both national boards to issue statements defending their players.

Kohli had further said that he himself saw players of the visiting team looking up to the dressing room and asking for confirmation whether they should take the DRS or not.

"I saw that two times happening when I was batting. I pointed it out to the umpire as well that it has happened twice that I have seen their players looking upstairs for confirmation and that's why the umpire was at him (Smith)," he had said.

"When he turned back, the umpire knew what he was doing because we had observed that and we told that to match referee also and the umpires that this has been going for the past three days and this has to stop," he added.

Meanwhile, Smith had apologised for his behaviour and said it was wrong on his part to look at the dressing room and he regretted doing the same.

"It was a bit of a brain fade and I shouldn't have done that," Smith had also said at the presser.

Backing Smith, Sutherland said that it was inappropriate to have his integrity called into question in that way, despite the player admitting that he was wrong.

"I was there and I saw a bit of it and I just couldn't help. Steven owned up to it straight away. He said that he'd done the wrong thing and to have his integrity called into question in that way I just thought it was not appropriate," Sutherland said.

"I felt I just had to make a stance and let people know we are 100 per cent behind him and don't have any question whatsoever about his integrity," he added.

Recently, a major section of Australian media have also repeatedly attacked Kohli, most recently calling him the "Donald Trump of the sporting world".

Rubbishing the comparison between Kohli and the U.S President, former Australian skipper Michael Clarke expressed his hope, saying that by the end of the four-match series, everything between the two nations would be back to normal.

"This is getting out of control. I don't know Donald Trump, never met him, but I know Virat Kohli. The media, the fans, the public will see at the end of the this series, Virat Kohli will shake hands with Steve Smith, they'll be good friends again and they'll go to the bar or the IPL or whatever it is and be completely fine," Clarke told in an interview to a news channel.

The four-match series is currently levelled at 1-1. The two sides will now head into the crucial fourth Test, beginning Saturday in Dharamsala.