Pujara said he regretted how the series had been dogged by controversy but said India were all behind Kohli. 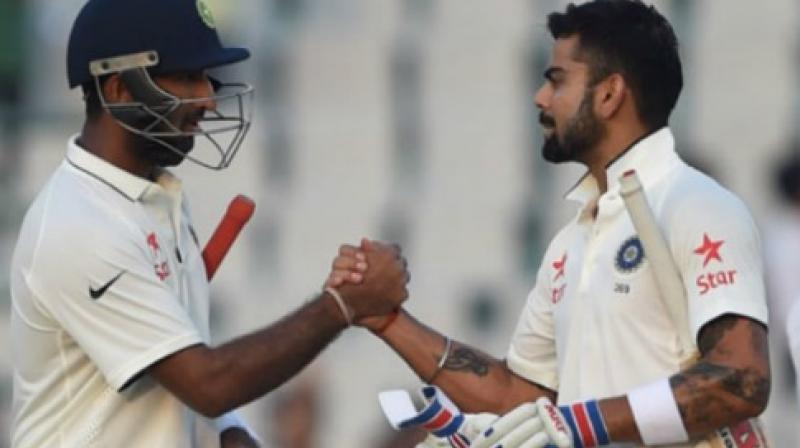 "He (Virat Kohli) is a great leader and so we are fully supporting him," Cheteshwar Pujara said in Dharamsala where the Test series reaches its climax. (Photo: AFP)

Dharamsala: Indian batsman Cheteshwar Pujara defended Virat Kohli Thursday against a barrage of criticism from the Australian media, insisting his outspoken skipper was one of cricket's great ambassadors.

Speaking ahead of the fourth and final Test between India and Australia which begins on Saturday, Pujara said he regretted how the series had been dogged by controversy but said the home side were all behind Kohli.

"He is a great leader and so we are fully supporting him," Pujara told reporters in Dharamsala where the series reaches its climax.

Kohli has been in the cross-hairs of the Australian media after accusing his opposite number Steve Smith of systematically abusing the decision review system (DRS) in the second Test in Banglaore.

Smith has admitted breaching the DRS rules by looking up to his own dressing-room to seek advice over whether to review an lbw dismissal, but he insists it was a one-off "brain-fade".

Kohli's failure to substantiate claims that it was part of a wider pattern of abuse prompted Australia's 'Daily Telegraph' newspaper to dub him the "Donald Trump of sport" who peddled "fake news".

And the former fast bowler Geoff Lawson, now a pundit for Fox Sports, has accused Kohli of acting like India's "worst behaved player" rather than displaying the gravitas expected of the captain of his country.

"I think it's really sad to hear such comments. We fully support Virat and he is one of the great ambassadors of this game," Pujara told reporters.

"I think the focus has shifted somewhere else, which shouldn't have happened. We are very much focussed on the game."

While the normally prolific Kohli has managed to score just 46 runs in the first three Tests, Pujara has been in outstanding form for India and hit a double century in the last Test in Ranchi.

Australia will retain the Border-Gavaskar Trophy if they can avoid defeat in the final game although India will remain the world's number one ranked Test whatever the outcome.