Windies deserve to be in Cup: Dwayne Bravo

Bravo said the advent of T20 has made India a flamboyant team. 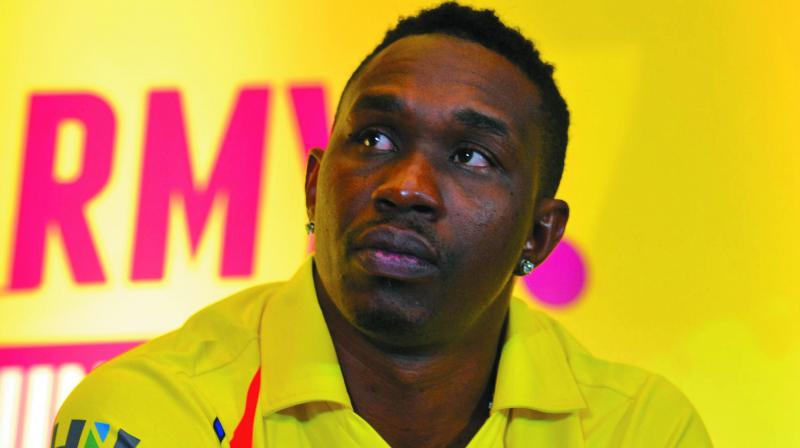 West Indian Dwayne Bravo landed in Chennai on Friday for the upcoming IPL-11.

Chennai: It’s hard to imagine a cricket World Cup without the West Indies, the two-time ODI champions and one of the greatest entertainers on and off the field. If not for a heavy downpour towards the end of a Cup qualifier match in Harare on Wednesday, the unthinkable would have happened with minnows Scotland looking on course to pull off a major upset.

Former West Indian captain Dwayne Bravo said no one team is guaranteed of anything. “There is a Fifa World Cup without Italy. So, these things are possible,” said the Chennai Super Kings all-rounder who landed in the city on Friday for the upcoming IPL-11.

Rain might have facilitated the West Indies entry into the 2019 World Cup, but Bravo said the Caribbeans were well deserved. “First of all, congrats to the team. I'm very happy that the West Indies have made it. It's a young team and  I honestly believe they deserve to be there despite what's going on in West Indies cricket. I love to see them compete amongst the best. We always do well in World Cups. Hopefully, I play the Cup as well,” said Bravo.

Bravo said cricketers from the West Indies bring a lot of flair and entertainment to the game, but they are no less serious when it comes to achieving victory. “We are natural entertainers. At the same time, we like to win tournaments. For me, every T20 league that I take part in has been successful. We fancy ourselves in the shortest format as T20 is about flair and entertainment. And that is what attracts the fans to the stadium. We all play the game in right spirit,” he added.

Bravo said the advent of T20 has made India a flamboyant team. “These days, Team India play with a lot of flair. I think T20 cricket has developed a lot of cricketers. It has made them fearless. Having fun is part of the game now,” he added.

'Dhoni is the best captain in the world'.

Bravo said M.S. Dhoni is the best captain in the world. “To play under MS is special for any player. For me personally, CSK are like a family. This is not just a cricket team. Apart from playing in the IPL, we keep in touch with each other. I can feel the love and appreciation from the fans. We missed all this in the last two years.

“I was hoping and praying (during auction) that I come back to Chennai. I didn't play any cricket after the Big Bash and was resting. I wanted to ensure that I prepare myself mentally and physically so that I can come and give my all for the city and the franchisee,” he said.