Sports   Cricket  23 Apr 2019  ' I only want to play for RCB in the IPL throughout my life': Yuzvendra Chahal
Sports, Cricket

' I only want to play for RCB in the IPL throughout my life': Yuzvendra Chahal

The 28-year-old Chahal has taken 14 wickets in the ongoing edition of the IPL and has become the go-to bowler for captain Virat Kohli. 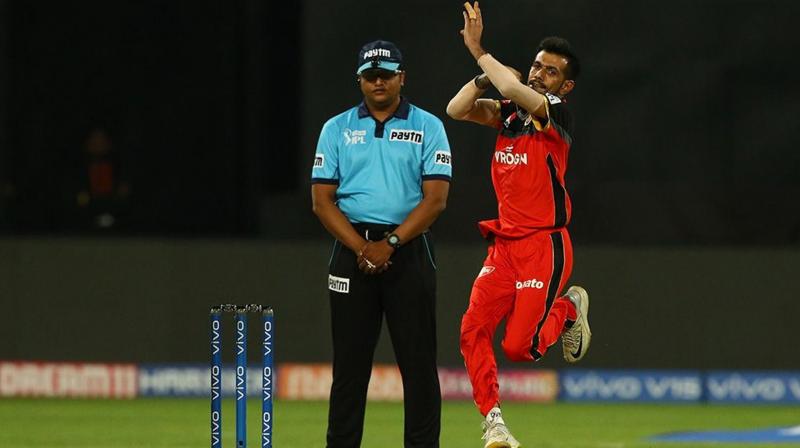 After losing seven matches, RCB has been able to defeat Kolkata Knight Riders and Chennai Super Kings back to back. (Photo: BCCI)

Chahal who joined RCB in 2014 has become a pivotal member of the team and the Red Army's bowling arsenal revolves around the willy bowler.

In an exclusive interview with ANI, Chahal opens up about his association with RCB, how the bowler feels when the captain relies on him and how the tournament will serve as a proper practice for the upcoming World Cup.

It is safe to say that Chahal made a foray into the Indian national team after his tremendous performances in the IPL. The bowler believes that RCB has really been special to him and he hopes to play for the team throughout his life.

“It’s like a family to me, when I came here in 2014 I never thought that I’ll play for this franchise. I really enjoy when I come to Bengaluru and I only want to play for RCB in the IPL throughout my life,” Chahal told ANI.

RCB has always been one team in the IPL with strong home support. After Chennai Super Sings, RCB sees the most loyal fan base.

Chahal believes that the crowd in Bengaluru comes out in big numbers to support them which is fantastic, but he tries to tune out the noise and just focus on his bowling.

“When you play at Chinnaswamy Stadium, it is very loud and the crowd is always supporting you. But whenever I bowl I just try to focus on my game and my situation like where to bowl, so I am used to it now and it is nothing new for me,” Chahal said.

The 28-year-old Chahal has taken 14 wickets in the ongoing edition of the IPL. The bowler has become the go-to bowler for captain Virat Kohli whenever he requires the breakthrough for his team. The player believes that it’s a good feeling when the captain and team management truly back you.

“Obviously you feed good, you get more confidence when your captain backs you and your team management gets behind you.

You always want to go for wickets, nothing happens if you go for runs as the captain is constantly looking for wickets, so it is a great feeling for me,” Chahal told ANI.

RCB has great batting ability with Kohli and AB de Villiers solidifying their line-up but the team has been struggling with bowling options over the past few years.

Dale Steyn may have added strength to the bowling scheme of things this year but the death bowling department still looks undercooked.

Chahal believes that all the bowlers have played international matches so they should be trusted with the options they choose and they should not be criticised for having two-three bad games.

“I think even in the last year we had the same bowlers, we did well but if someone is not performing well for two to three games, you cannot blame the player.

I think all the bowlers that we have in our squad, have played international matches so they the talent and the skills to play this level of cricket,” Chahal said.

Chahal also said that is an honour to play with both Kohli and de Villiers. The player also opined that playing such a quality tournament like IPL before the World Cup will help him get ready for the upcoming 50-over mega tournament.

“They are two legends: One is a number one batsman (Kohli) and the other has retired but he is a 360-degree player (AB de Villiers) so it is a privilege to play alongside them,” Chahal said.

“Before the World Cup, you have 14 matches and it’s a good chance to prepare for the World Cup as you play along with the best players across the globe and if you perform in this tournament you go into the international matches with more confidence,”  he added.

RCB is going through a bit of resurgence in this edition of the IPL. After losing seven matches, the team has been able to defeat Kolkata Knight Riders and Chennai Super Kings back to back and the team’s hope of reaching the playoffs is still alive.

The team is currently placed at the last position in the league standings with six points and they next take on Kings XI Punjab on April 24.