The experienced Mumbai-based coach has his work cut out for him in uniting the team in quick time ahead of T20 Tri-series against Pakistan, Australia. 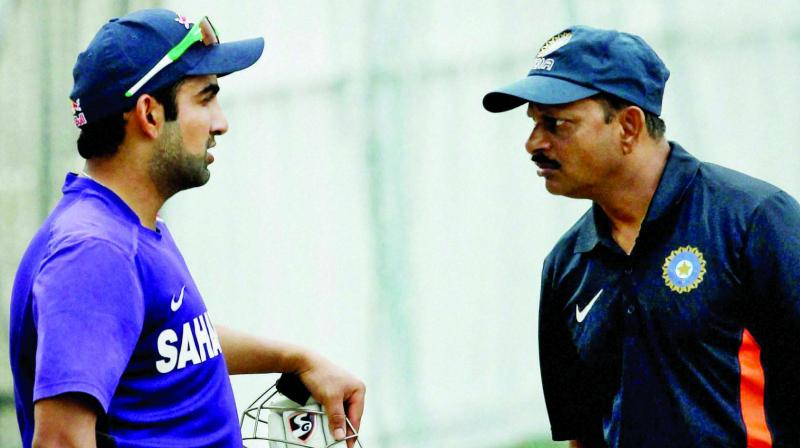 India A team coach Lalchand Rajput with skipper Gautam Gambhir during a practice session ahead of the 2nd practice match against Australia, in Chennai in 2014.

Former Mumbai opening batsman and cricket administrator Lalchand Rajput is ready for a brief stint with Zimbabwe cricket team as interim coach. The 56-year-old crisis man known for his man management skills will have to deliver quickly for the beleaguered African nation team.

His tenure is initially for three months and he will be in charge for the triangular Twenty20 series with Australia and Pakistan in July. It will be followed by the five-match ODI series against Pakistan.

“They (Pakistan and Australia) are best teams and it is good for me to help my team do well. We are looking at the tournament in a positive way and in Twenty20 cricket anything can happen,” Rajput said.

Rajput’s confidence stems from his remarkable achievements during similar type of roles in the past. The former India cricketer was the cricket manager of the Indian team when they won the ICC World T20 2007 under young skipper Mahendra Singh Dhoni. That came shortly after India had failed to get past the first round of the ICC Cricket World Cup 2007 in the Caribbean and Greg Chappell had been removed as coach of the Indian team. He was the coach of IPL franchise Mumbai Indians also during the inaugural season.

He served in the Mumbai Cricket Association under various posts and in June 2016, Rajput was named as head coach of Afghanistan's national team, replacing Pakistan’s current chairman of selectors Inzamam ul Haq. During his tenure, Afghanistan defeated West Indies in a one-day international at Gros Islet and gained Test status. But the Afghan board ended his contract in August 2017; he was later replaced by Phil Simmons. Afghanistan is set to play their first Test against India in June.

He is taking charge amid crisis in Zimbabwe cricket after Heath Streak, his backroom staff, the captain and the chairman of selectors were all fired after Zimbabwe failed to qualify for ICC 2019 World Cup, the first time it won’t be at the 50-over tournament since 1979.  The players have raised the prospect of a strike, saying they haven’t been paid salaries, allowances, match fees and bonuses.

Rajput is ready to handle another crisis situations and try to gel the team together. “It is a good challenge for me and I am looking forward to it. They have some great players and hopefully we can do well as a team,” he said.

Though his three-month contract can be extended, Rajput isn’t anxious for a long-term role at the moment. “First I want to look how things are and then can take a call after the series,” he said.