Oz win from jaws of defeat

Steve Waugh won that and chose the dressing room to the right as you face the historical Lord’s Pavilion from the Nursery End. 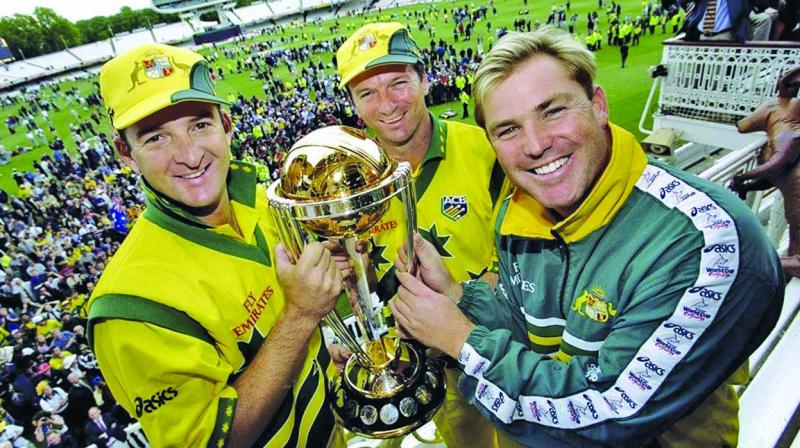 England’s fourth World Cup as host had several highs and lows. They were left behind after a peculiar event took place on the evening before the final. Now, the teams that used the away dressing room — West Indies (1975 and 1979) and India (1983) — had won the World Cup and so a toss was proposed. Steve Waugh won that and chose the dressing room to the right as you face the historical Lord’s Pavilion from the Nursery End.

The rest, as they say, is history, as Australia not only won the final rolling Pakistan over but also went on to establish a domination that was to last till the 2007 final and a hat-trick of wins. It is amazing then that Australia, slow as the tortoise at the start, were on the brink of elimination in the league game against South Africa. Herschelle Gibbs at mid wicket, celebrating a tad too soon, lost his grip on the ball and floored Steve Waugh (on 56 then) who took Australia to victory with a smashing innings of 120*. It is probably apocryphal but Steve is supposed to have told Gibbs – “Hersh, You’ve just dropped the World Cup.”

That was not to be the end of a stirring Australia-South Africa story in the competition. Australia, the last team to qualify for the Super Six, came into the semis second behind Pakistan and faced the old southern hemisphere rival in that sensational tie in Birmingham.

By a bizarre twist of fate, Australia went through to the final after the tie on the basis of a better net run rate. Such were the follies of the rules that governed the seventh World Cup. The finish itself was uproarious as Lance Klusener, who had dashed to 34 off just 14 balls, appeared to have a brain fade as he called Allan Donald for a non-existent single when all they needed was one run off four balls. Mark Waugh at mid off in a single-saving ring threw to bowler Fleming who rolled it on to wicket-keeper Gilchrist. Donald, having dropped his bat and picked it up and setting off late for the run was well short. Donald’s hard stare at his partner at the end told the tale.

Pakistan had marched into the Super Six confidently despite losing to India in the famous match at Old Trafford played with tight security at the height of the Kargil War. India’s hero was Venkatesh Prasad who used the conditions best in his 5-27 that made a mess of Pakistan’s chase. Losing three games, including — mysteriously it must be said — to Bangladesh, Pakistan stormed into the final as the clear favourite after making a mockery of the chase against New Zealand in the semi-fnal with an opening stand of 194 between Saeed Anwar and Wajahatullah Wasti.

A final delayed by rain was to be the shortest in history as Australia ruthlessly demolished Pakistan in under five hours. Having lost three wickets before spin was brought on, they collapsed to the brilliance of Shane Warne who took 4-33 including his bowling of Ijaz Ahmed with an unplayable leg break pitching outside leg and hitting off.

Any thought of Pakistan seamers led by captain Wasim Akram defending a measly 132 wilted under the aggression of Adam Gilchrist’s half century off 33 balls. A crowd of 27,835 went home early after Warne took the MoM and Lance Klusener was declared man of the World Cup.