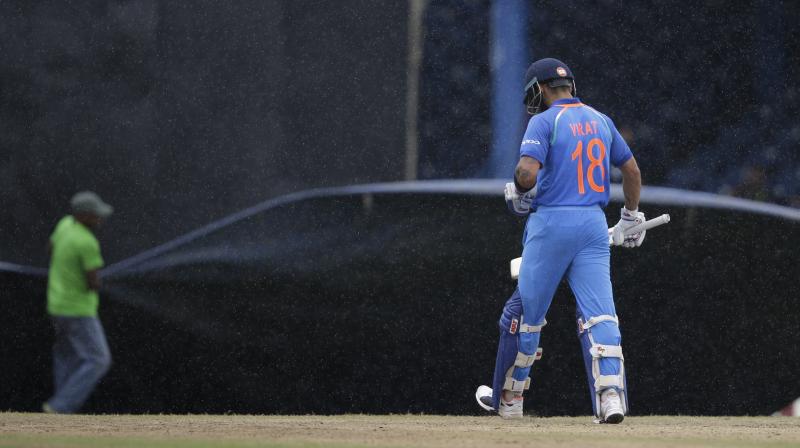 Shikhar Dhawan extended his red-hot form with a 87-run knock before rain forced an early suspension of the Indian innings in the first cricket One-day International against the West Indies. After two rain-interruptions, India's innings ended at 199 for three in 39.2 overs.

The game has been called off due to heavy rain. The series is tied 0-0 after one game.

Like in the Champions Trophy, the Indian openers batted quite slow, scoring just 47 runs in 10 overs and the following batsmen did not get the chance to accelerate later.

Rain getting heavier and has stopped play again.

The covers are completely off and players are back on the field.

And the rains come pouring down, as the covers come out on the field. It does not seem to be pouring as heavily, but the condition of the outfield after the downpour may be a cause for concern.

Wicket! Dhawan beaten by a delivery from Bishoo that skidded of the surface. Umpire Dharmasena raised his finger, but he decided to review which went against him. India lose their referral and also wicket. Both the openers now back inside pavilion

Rahane's wicket does not seem to have affected much, as Dhawan as taken the responsibility of doing the bulk of the scoring on his shoulders. Virat Kohli, meanwhile, is playing the sheet-anchor role.

Ajinkya Rahane departs for 62. Alzarri Joseph bowls slower delivery which Rahane scoops up in the air which was taken by Jason Holder at Mid on

The two openers have carried he scoring forward on a steady note, and are now nearing their half centuries. India look set for a big total today, as they cross the 100 run mark.

India are off to a steady start, as Ajinkya Rahane and Shikhar Dhawan engineer some good shots against some tight West Indies bowling. There was a brief moment of concern for Shikhar Dhawan, who was hit on the arm, as the physio came in to take a look. However, the southpaw is back on his feet, as India continue their steady start.

West Indies skipper Jason Holder won the toss and elected to field in the first ODI against Team India. Left arm chinaman Kuldeep Yadav will be making his debut in the first ODI

Preview: Virat Kohli and co are all set to redeem themselves after suffering a heavy defeat against arch rivals Pakistan in the final of the 2017 ICC Champions Trophy, as they take on West Indies, in the first of the five ODIs, at the Queen’s Park Oval, in Port of Spain, on Friday.

The Indian cricket team has been shrouded in controversy of the Virat Kohli-Anil Kumble rift, as the latter stepped down as the Team India head coach after the end of the Champions Trophy.

However, Kohli and his men will be looking to turn things around from the disappointment of the Champions Trophy in the Caribbean islands, in the five ODI and one T20I series.

However, Team India will be missing the services of two key players, in the form of opening batsman Rohit Sharma and opening bowler Jasprit Bumrah, both of whom have been rested for the series.