Dhoni, who smacked all three balls that he faced into the stands, said CSK’s fan following has grown in the last two years. 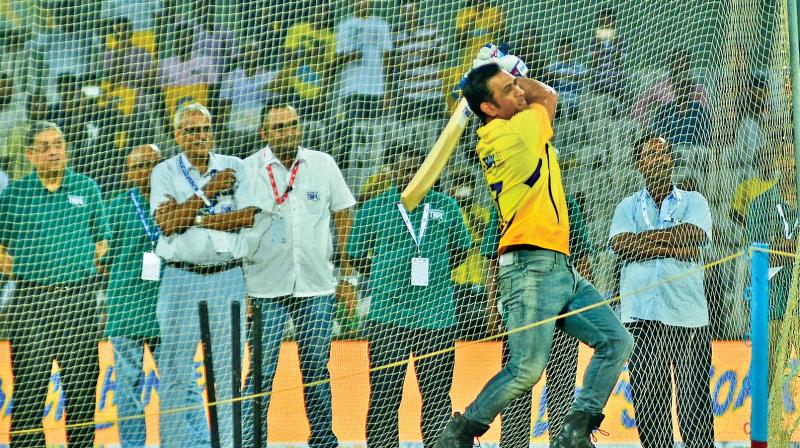 Chennai: The yellow jerseys are back at Chepauk after a two-year gap. The inaugural ceremony of the second edition of the Tamil Nadu Premier League turned out to be a platform for Chennai Super Kings’ first promotional event on their return from IPL suspension. Sporting the CSK colours, M.S. Dhoni, who raised the franchisee’s popularity to dizzying heights, featured in a ‘six-bashing’ competition along with his former teammates Matthew Hayden, Mohit Sharma, Pawan Negi, S. Badrinath and L. Balaji.

Dhoni, who smacked all three balls that he faced into the stands, said CSK’s fan following has grown in the last two years. “Apart from Team India’s blue, I think the yellow is pretty special. Fans have stayed with us and the love and affection was always there. It will get amplified when CSK return to play their first game here next year. Thanks a lot for being true cricket fans. The long wait is over,” said Dhoni.

It’s not a guarantee that Dhoni would represent Super Kings in IPL-11 as the Board hasn’t announced details of the auction and player retention rule.

The former CSK skipper, who last played at Chepauk in an ODI against South Africa in October 2015, considers Chennai his second home. “I can proudly say that as I played a lot of cricket here. I made my Test debut in Chennai. Not only as a franchise player but even when we have come with the India team, the crowd has given us unconditional love and affection,” he added.

Dhoni explained his approach in hitting sixes. “I try to watch the ball and go against orthodox form of cricket which says hold the bat lightly. I try to hold it a bit firmly. What I look for is a good connection. I hit big sixes in practice, but in the matches, it is more flat. I don’t get a lot of elevation,” he added.

Dhoni said the advent of T20 has changed the way cricketers approach the game. “I think more than power, players have bigger heart these days. They are willing to take the challenge, be it the first or last delivery of the game. They want to get results by playing aggressive and more expressive cricket,” he said.

The superstar of Indian cricket had a word of caution for the upcoming players. “Tournaments such as TNPL are a great platform. But take it slow and steady. Don’t aim to play for India straightaway. The first aim should be to get into the state side, do well and slowly progress to Duleep and Deodhar and then India A level,” said Dhoni.