India, set 229 for victory, were on course at 191 for three but Punam Raut's dismissal for 86 sparked a dramatic collapse. 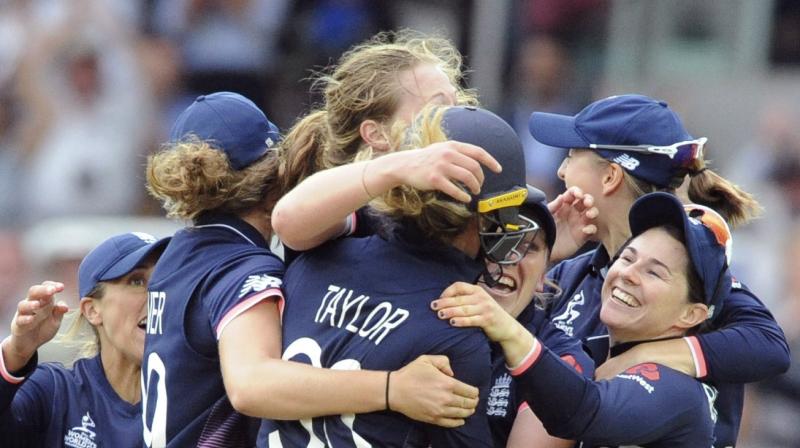 London: Anya Shrubsole bowled England to a dramatic nine-run win over India in the Women's World Cup final at Lord's on Sunday.

But the dismissal of opener Punam Raut, who made a fine 86, lbw to Shrubsole, sparked a stunning collapse.

Shrubsole took five wickets for 11 runs in 19 deliveries as India, bidding for a first World Cup title on the ground where their men's side won an inaugural World Cup crown in 1983, slumped to 219 all out.

Pace bowler Shrubsole finished with stunning figures of six for 46 in 9.4 overs as England won a fourth World Cup title and third on home soil, by gaining revenge for their opening group stage loss to India.

Opener Smriti Mandhana -- who made 90 in that match -- was bowled for a duck by Shrubsole.

But fellow opener Raut hit Shrubsole back over her head for six.

Meanwhile India captain Mithali Raj, in what was, together with fellow 34-year-old Jhulan Goswami, likely to be her last chance to win a World Cup after being on the losing side in 2005, struck several fine boundaries.

But the all-time leading run-scorer in women's one-day internationals, effectively ran herself out for just 17.

Her exit brought in the big-hitting Harmanpreet Kaur, whose stunning 171 not out had set up India's semi-final win over reigning champions Australia.

Raut went to fifty in 78 balls and Kaur got there in 80 balls.

But the duo were separated when Kaur swept Harley straight to Tammy Beaumont at deep backward square to end a stand of 95.

Sarah Taylor, arguably the best wicket-keeper in the women's game, then missed a chance to stump Raut, on 65 off spinner Laura Marsh.

India's target was now under a run a ball and Veda Krishnamurthy raised a fifty stand with Raut off just 54 balls when she cut Shrubsole over point and drove her over mid-off for two fours in as many balls.

Raut's fine innings ended when she was lbw to Shrubsole, having faced 115 balls including four fours and a six.

It was the start of a cascade of wickets as panic set in.

Krishnamurthy made a fine 35 before she holed out off Shrubsole before Goswami was yorked by Shrubsole for a duck.

Shika Pandey was run out before Shrusbole, after Jenny Gunn had dropped a simple catch, ended the match by bowling Rajeshwari Gayakwad for a duck as England won yet another close game this World Cup.

Earlier pace bowler Goswami took three for 23 in 10 overs as India held England to 228 for seven.

But from 47 for none, they lost three wickets in quick succession to be 63 for three, with leg-spinner Poonam Yadav (two for 36) having Knight lbw for just one on the sweep.

Taylor and Sciver put on 83 before Goswami, the all-time leading wicket-taker in women's ODIs, struck in her second spell.

Taylor was caught down the legside by wicket-keeper Sushma Verma.

And 146 for four became 146 for five when Fran Wilson was lbw for a golden duck next ball.

But England's tail, with Katherine Brunt making 34, took them past 200 and those runs proved vital in the end.