Leading the show was the redoubtable Jhulan Goswami, who scythed through the English middle-order. 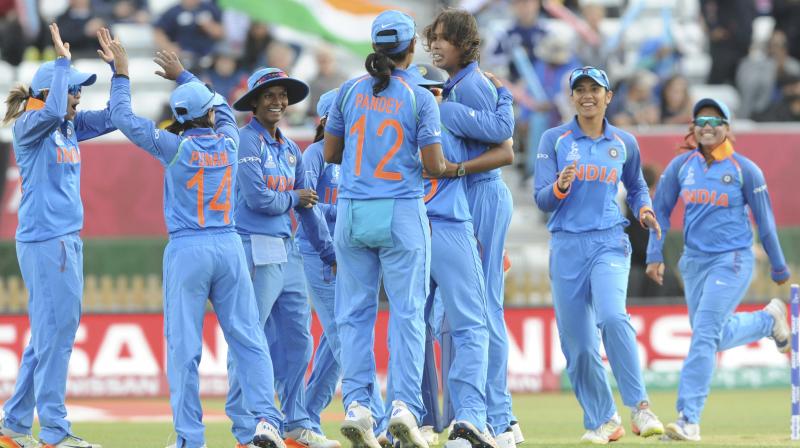 Team India has left themselves with a realistic chance of doing what seemed unreal at the start of the tournament. (Photo: AP)

London: India turned up in a manner befitting the occasion and stopped England at 228 for seven in the final of the ICC Women's World Cup, leaving themselves with a realistic chance of doing what seemed unreal at the start of the tournament.

The coin landing in the opponents' favour at the toss was hardly a deterrent as India went about the task in a professional manner. Leading the show was the redoubtable Jhulan Goswami, who scythed through the English middle-order.

A proven performer for far too long, Jhulan delivered with three wickets in the most widely watched game in the history of women's cricket. The highlight of the lanky Bengali's outing was the back-to-back dismissals of Sarah Taylor and Fran Wilson, which pegged England back.

Taylor is a legend of the women's game and Sciver entered the marquee match on the back of two centuries, and Jhulan had them caught behind and trapped in front of the wicket.

In what could be her last match, Taylor walked off to an ovation from the almost sell-out Lord's crowd after scoring 45 off 62 balls. The veteran English batswoman, surprisingly, could not hit a boundary in her innings.

The in-from Sciver struck 51 off 68 balls, hitting five boundaries in the process, before her recovery act was cut short by Jhulan in the first ball of the 38th over. A former ICC Player of the Year, Jhulan finished her spell with impressive figures of 3/23 in the allotted 10 overs, which included three maidens.

The end of Jhulan's spell proved to be a boon for England, who rode on Katherine Brunt's 42-ball 34 and Jenny Gunn's 25 off 38 balls towards the end to sign off with a respectable total.

After Jhulan, leg-spinner Poonam Yadav was the most impressive bowler, finishing with two 2/36 in her quota of 10 overs. Earlier, England were off to a decent start with openers

Lauren Winfield (24) and Tammy Beaumont (23) putting on 47 runs in a little over 11 overs. Rajeshwari Gayakwad gave the spirited visitors their first breakthrough when she removed Winfield.

Yadav dismissed the other opener and skipper Knight in a span of two overs to leave England in a spot of bother at 63 for three in the 17th over. Taylor and Sciver steadied the ship with a partnership before spearhead Jhulan returned and removed Sciver. The hosts then got some useful runs from the willows of Brunt and Gunn.

India are making their second appearance in a World Cup final. They lost their previous final, against Australia in Centurion, by 98 runs. In the ongoing edition, England entered the final after squeaking home by two wickets against South Africa, while India beat Australia by 36 runs.