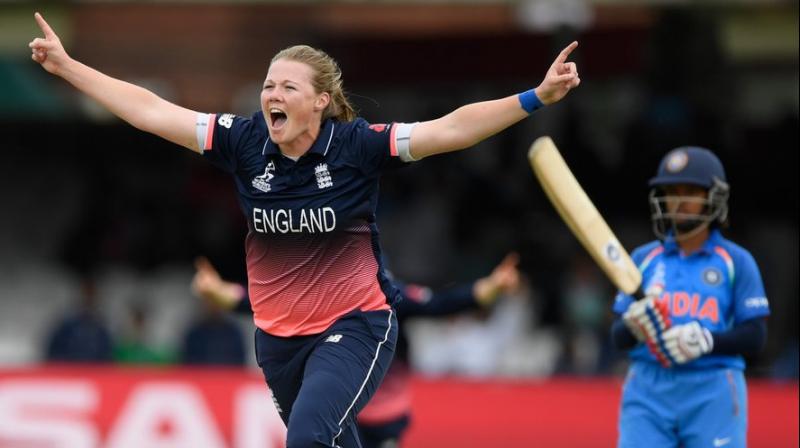 Anya Shrubsole was the star of the evening with 6 wickets. (Photo: AP)

London: After being given to chase a target of 229 by England, the Indian cricket team led by Mithali Raj and co failed to keep their nerve, as the hosts clinched a nail-biting 9 run victory. India endured a horrible start by losing Smriti Mandhana and Mithali Raj, but were brought back into the game by Harmanpreet Kaur and Punam Raut who put up a 95 run partnership. However, it wasn't meant to be for the visitors as Anya Shrubsole ripped apart the Indian middle order with consecutive blows to help the hosts lift their 4th World Cup title.

ALL OVER! Just after being dropped off the previous ball Gayakwad is clean bowled by a yorker. Shrubsole gets her 6th of the night and England are champions.

RUN-OUT! Big mix-up between Shikha Pandey and Deepti Sharma. Shikha drives a fuller delivery from Gunn at cover. There is a miscommunication with Deepti Sharma at the non-strikers end and decides to return at the strikers end. She's well short even without a dive. 11 runs needed off 12 balls.

ANOTHER WICKET! Shrubsole right on the money. New comer Jhulan Goswami who impressed with the ball earlier, has no answer to this yorker from Shrubsole. The English bowler gets it swinging in, right under Goswami's bat and rattles her stumps. Is Deepti Sharma India's only hope?

INDIA IN TROUBLE! Is this the final nail in the coffin for India? Krishnamurthy cannot believe it, but she has to walk back. The batswoman looks to go big over long on, but miscues her shot that goes miles up in the air. Natalie Sciver collects it safely at midwicket. Big blow for India!

WICKET! Sushma Verma has to depart for a duck after mistiming her sweep. The ball drifts towards leg, off her gloves and then clips the bails after hitting the leg stump.

WICKET! Shrubsole gets rid of the big fish! Raut looks to nudge a single on the leg side but is trapped in front of the stumps after mistaking a slower off-cutter. Punam goes for a review, but she's crossed the 15 second time limit. Departs for a glittery 89!

The Indian team continued their run chase, as they inch closer to the target. Harmanpreet Kaur had depart right after she reached her 10th ODI fifty. However, Punam Raut continued to take Team India forward as she is currently being involved in a partnership with Veda Krishnamurthy.

WICKET! Oh dear! Just when Harmanpreet Kaur was looking in good shape after reaching a half-century she has to depart. Hartley tosses a fuller one that is connected well by the batswoman with a sweep right from the middle but heads straight to Beaumont at deep square leg. What next for India?

After soaking off the pressure, Mithali Raj and Harmanpreet Kaur get a half-century for themselves. Their partnership is in the 90s now and this could well be the turning point of the match that England are oblivious about. Spin is introduced in the form of Alex Hartley.

This is a big innings from Punam Raut and her 🇮🇳 teammates certainly appreciate it! 👏#ENGvIND #WWC17 pic.twitter.com/T3ADW9Dneh

A slow, yet much needed half-century partnership between Harmanpreet Kaur and Punam Raut. The job isn't done yet and they need to up the ante with boundaries. Meanwhile, India get past the 100 run mark.

Runs have not been able to flow easily after Mithali's departure and the required run rate is creeping up. The English spinners are sticking to tight lengths and piling pressure on the batsman. India need a solution!

There is someone special at Lord's to cheer the Women in Blue.

The Indian team continued their innings on a careful note after the departure of Smriti Mandhana. Captain Mithali Raj walked in to bat at number three. The duo of Mithali and Punam Raut will hope to build a steady partnership.

Punam Raut and Smriti Mandhana walked out to the middle as India began their run chase. Katherine Brunt opened the bowling attack.

India got off to a shaky start in the run chase against England after they lost opener Smriti Mandhana early on. Anya Shrubsole got the wicket of Mandhana, who has not scored much since her century against West Indies earliewr in the tournament.

WICKET! Smriti Mandhana departs early as she is clean bowled by Anya Shrubsole.

India captain Mithali Raj's gamble works off well as Deepti Sharma concedes only 7 runs in the last over to let the hosts finish at 228-7.

RUN OUT! A fruitless partnership comes to an end from Brunt and Gunn. Gunn drives one straight to Deepti Sharma (who has been impressive so far) at cover and the fielder makes a direct hit at the strikers end. Brunt is far away from the frame and has to depart.

What a talent Deepti Sharma is! Best fielder in the side & can walk into the team as a pure bowler & a pure batter too.#WWC17Final

Goswami caps off a brilliant spell and Rajeshwari Gayakwad contains the pressure from there. The run-rate has moved down steeply for England after Taylor's wicket and the hosts now need to up the ante if they need a big score.

WICKET! Jhulan Goswami continues her fine day in the middle as she sends Natlie Schiver packing. The England batswoman had moved across, trying to guide one through the leg side. But the ball has hit her pads and it looks out LBW. Schiver reviews the on-field umpire's call but as the review shows the ball was hitting the stumps. England 6 down, Goswami on a roll in the big final.

London: Big chance for India! Things looking shaky for the hosts after losing two consecutive wickets. There is a big mix-up between Schiver and Brunt, as Schiver wants a second but Brunt does not budge. India in a hurry make a wrong throw and Brunt makes it easily to the non-strikers end.

The experienced Jhulan Goswami is doing it all over again for India as the medium pacer’s double strike, dismissing Sarah Taylor and Fran Wilson, has left England reeling with 5 wickets down, in the ICC Women’s World Cup final at Lord’s on Sunday.

While Mithali Raj-led India are chasing their maiden ICC Women’s World Cup title, the Heather Knight-led hosts are in contention to win the title for the 4th time; first time since 2009.

India have been on the backfoot in pursuit of a wicket. While Sarah Taylor and Natlie Schiver have brought back the momentum for the hosts by keeping the strike rate healthy with ones and twos.

Sarah Taylor and Natalie Schiver have soaked the pressure well after losing two big wickets, bringing up a 50 run partnership in the process. It has started drizzling at Lord's and we hope rain doesn't spoil play.

No shortage of support for team India:

India came back strongly in the game, thanks to a couple of wickets from Poonam Yadav, who sent off skipper Heather Knight and Tammy Beaumount. Wicket-keeper batswoman Sarah Taylor and Natalie Sciver continued the England innings on a cautious note, after the departure of their captain.

Both the openers departed after the tenth over. While Rajeshwari Gayakwad removed Lauren Winfield, Poonam Yadav got the wicket of Tammy Beaumount. Now, captain Heather Knight and wicket-keeper Sarah Taylor are at the crease, hoping to build a steady partnership.

Rajeshwai Gayakwad bowled out Lauren Winfield in the 12th over, just when the latter was looking settled.

The hosts continued to score runs as they approached the tenth over. Jhulan Goswami continued her good spell after she bowled a couple of maiden overs. However, Jhulan almost had Winfield out, when she appealed for an LBW. The umpire gave it out, however, the decision was overturned when Winfield went for a review.

Spin was also introduced with Rajeshwari Gayakwad coming into the attack. However, she went for 12 runs in her first over, but came back strongly to bowl a maiden in her second.

England have started strongly in the first five overs with the openers Lauren Winfield and Tammy Beaumount off to a good start. Indian pacer Jhulan Goswami just conceded one run in the first over of the match, but the hosts started firing from then on.

Jhulan Goswami, though has had a good start, after conceding just nine runs in three overs

England have won the toss and will bat first. Mithali Raj says that she would have batted too. Both teams are unchanged.

London: Mithali Raj-led Team India will once again battle it out against Englandat Lord’s on Sunday when the two teams clash in the final of the ICC Women’s World Cup.

It was in the first match of the World Cup on June 24 when the Women in Blue defeated the hosts by 35 runs, thanks to the top order batswomen.

Since then, both teams had a successful tournament, despite India losing two matches, whereas England lost one.

India previously reached the summit clash of the World Cup back in 2005, where they finished runners up after losing to Australia by 98 runs in Centurion. India, though, have not won the women’s World Cup, and the Asian giants will hope to do so on Sunday.

Captain Mithali Raj and Jhulan Goswami were the only players who were part of the 2005 final, with the rest of the team making their first appearance in a final.

Apart from Mithali Raj, the trio of Punam Raut, Smriti Mandhana and Harmanpreet Kaur were the ones who played a crucial part in the tournament, with these three batswomen stepping up at crucial times.

It was Harmanpreet’s quickfire 171 from 115 balls which helped India post 281 in from 42 overs in the semifinal against Australia, which later helped India advance to the final.

The Indian bowlers, too, has enjoyed a fantastic tournament so far, with Deepti Sharma leading India’s bowling charts with 12 wickets.

Other bowlers like Rajeswari Gayakwad and Shikha Pandey have also had their moments, with the former picking up a five-wicket haul in the knockout match against New Zealand, where they bowled  the Kiwis for 79, after posting 265-7.

There will be no turning back when the two captains walk for the toss at Lord’s on Sunday, and it promises to be an evenly contested clash.

Mithali Raj's Team India have arrived at Lord's Cricket Ground ahead of the much awaited final, which starts in less than an hour.