Sports   Cricket  23 Jul 2019  Harsha Bhogle questions the value of including Wriddhiman Saha into the Test side
Sports, Cricket

Rishabh Pant was made the prime wicket-keeper in all three formats, especially after MS Dhoni made himself unavailable for two months. 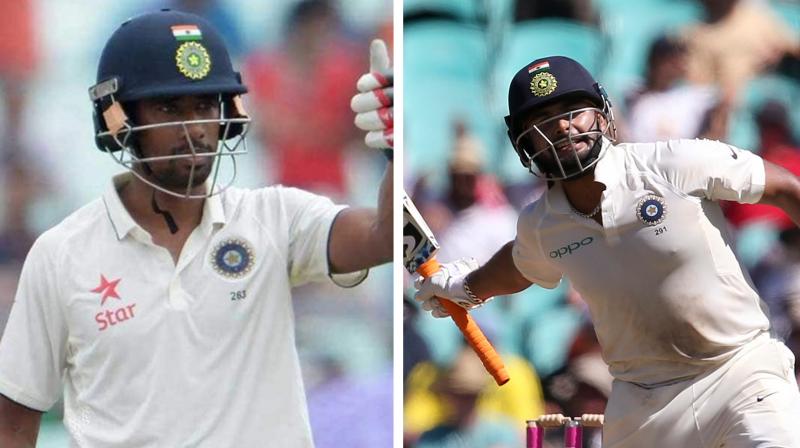 Wriddhiman Saha has also returned to the Test squad, but Saha might find it difficult to make it to the playing XI despite being named in the 16-member squad. Rishabh Pant, who impressed the selectors with his impressive 159 against Australia in the Test, making him the prime favourites among the selectors. (Photo:AFP)

Mumbai: India declared the team for the West Indies tour that is to start with a T-20 on August 3 in US. The Virat Kohli-led side will play three T-20Is, two Test matches and a bilateral ODI series. However, the selectors made many changes for the three formats, especially after the World Cup, keeping the next big ICC event in mind. Rishabh Pant was made the prime wicket-keeper in all three formats, especially after MS Dhoni made himself unavailable for two months to serve for the parachute regiment. Meanwhile, Wriddhiman Saha has also returned to the Test squad.

Saha, who last played for India in 2018, was out of the squad for a long time due to a series of injuries. Following the 2018 away Test series against South Africa, Saha then featured in the 2018 IPL. And, after the IPL he again went out the domestic cricket only to make his comeback in the Syed Mushtaq Ali Trophy this year.

Nonetheless, Saha might find it difficult to make it to the playing XI despite being named in the 16-member squad. Rishabh Pant, who impressed the selectors with his impressive 159 against Australia in the Test, making him the prime favourites among the selectors. Pant also has hit another ton in another away match against England. On September 11, 2018, Pant scored his first Test ton, against England, making him the second-youngest wicket-keeper and the first Indian wicket-keeper to hit a Test century in England on a debut match.

‘India needs to figure out whom they should make the prime wicket-keeper’, says Bhogle

Saha’s comeback is a good news for him after chief selector MSK Prasad stated Wriddham Saha deserved an opportunity to comeback. However, cricket analyst and commentator Harsha Bhogle is of the opinion that India must prioritise who is the number one wicket-keeper for the team. Saha’s comeback has become easier due to the absence of Dinesh Karthik and MS Dhoni.

Questioning the value of having Saha in the Test side, Bhogle tweeted that Saha is a better keeper than Pant, and he was the present wicket-keeper also despite getting injured. The veteran commentator and analyst stated there was no need of adding Saha to the Test squad if India’s intentions were making Rishabh Pant the prime keeper. Adding Saha to the side would serve no purpose.

I hope the selectors make it clear who the no 1 keeper for the tests is. Saha is clearly the better keeper, was the incumbent when injured. But if Pant is the keeper they want to go with, there is little to be gained by having Saha hanging around.

Saha’s entry to the squad has become complex after Pant was made the prime keeper despite having featured in 32 Test matches in comparison to Pant’s nine matches. Moreover, Andhra Pradesh’s KS Bharat has also grabbed the attention of the selectors for the position of the keeping behind the stumps. And, with that it looks like Saha may no longer be the prime wicket-keeper or even may not feature in the playing XI also.