Jadeja played an unbeaten knock of 39 runs and helped India to win the final ODI by four wickets and seal the series 2-1. 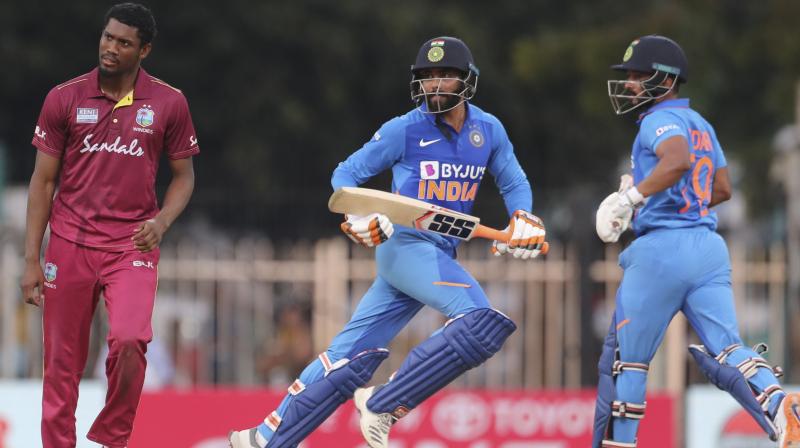 After winning the three-match ODI series against West Indies, India's all-rounder Ravindra Jadeja on Sunday said that his innings was very crucial looking at the situation of the match and he just tried to play as per the merit of the ball. (Photo:AP)

Cuttack: After winning the three-match ODI series against West Indies, India's all-rounder Ravindra Jadeja on Sunday said that his innings was very crucial looking at the situation of the match and he just tried to play as per the merit of the ball.

Jadeja played an unbeaten knock of 39 runs and helped India to win the final ODI by four wickets with eight balls to spare and take the series 2-1.

"I think it was a very crucial innings that I played. It was the series decider. When I came to the crease, I was looking to play with Virat. The wicket was very good to bat upon. It was imperative to play according to the ball," Jadeja told reporters.

"Virat and I talked that the wicket is so good. He told me to stay there at the crease and he was looking to finish the game. Unfortunately, he got out and he told me to play normal cricket and not do anything silly," he added.

West Indies had scored 315/5 in the allotted fifty overs as Nicholas Pooran and Kieron Pollard played knocks of 89 and an unbeaten 74, respectively.

Navdeep Saini had taken maximum wickets for India as he scalped up two wickets.

For India, Rohit Sharma, KL Rahul, and Virat Kohli all registered half-centuries and in the end, it was Ravindra Jadeja and Shardul Thakur who took India over the line by four wickets with eight balls to spare.

"There was dew in the last 15-20 overs. In the last overs of our bowling innings, it was tough to bowl. The wicket also got good to bat upon. We knew dew will play a crucial role in the last overs. 340 could have been a big total, so those 15-20 runs made the difference," Jadeja said.

"We lost three wickets in the middle and that happens in ODI cricket. Once you get a good start with the openers, it can happen that middle-order batsman gets out cheaply. We knew the wicket is good and that we can chase the target," he further said.

Indian fielders dropped quite a few catches in both T20I and ODI series, but Jadeja said that the team would now work hard to get better in fielding.

"In both ODIs and T20Is, many chances were dropped. We have a young unit. In the next series we will focus more on the fielding bit. Practising with the wet ball is the key to get in the best shape for fielding when there is dew," Jadeja said.

India will next face Sri Lanka in a three-match T20I series. The first T20I will be played on January 3.