This was 15th time in the last 19 editions that Rest of India had won the the tournament, which is in its 55th year. 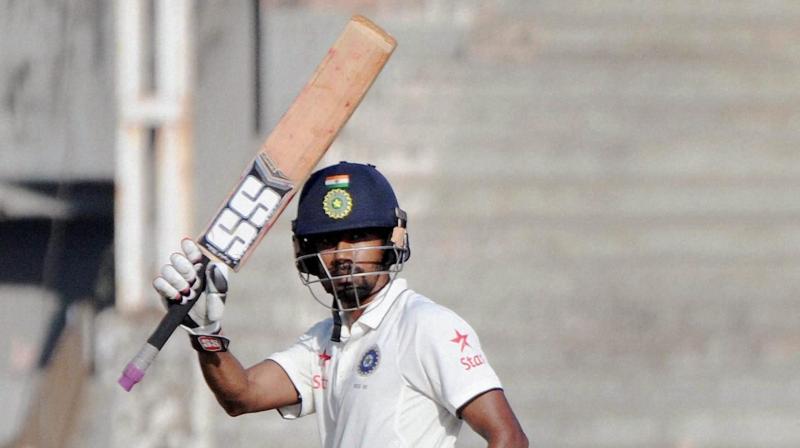 Mumbai: Wriddhiman Saha's career-best first-class knock of 203 was the stand-out performance as Rest of India lifted the Irani Cup after effortlessly chasing down a 379-run target set by Gujarat with more than two sessions to spare here on Tuesday.

Wicketkeeper Saha and Pujara, unbeaten on 123 and 83 respectively last evening in a team score of 266 for four, carried on in imperious fashion on the fifth and final morning to steer the team home an hour before lunch in 19.1 overs at the Brabourne Stadium here.

This was 15th time in the last 19 editions that Rest of India had won the the tournament, which is in its 55th year.

Rest of India finished with 379 for four in 103.1 overs to cruise home in style.

The duo's fifth wicket unbroken partnership was worth 316 runs in 78.5 overs. It was the second-best in the tournament's history after the highest of 327 for the fourth wicket between Ravi Shastri and Praveen Amre for Mumbai against the Rest at Bengaluru in 1990-91.

Both the batsmen were largely untroubled by the newly crowned Ranji Trophy champions' bowling attack even though the target set by Gujarat, who had taken a handy 132-run first innings lead, was stiff.

The winning hit by Pujara, a step-out lofted shot to long-on for his 16th hit to the fence off Hardik Patel, summarised the domination he had on the Gujarat bowling along with Saha. The Rajkot-born batsman stayed at the wicket for just over 400 minutes and faced 238 balls to remain unbeaten.

Saha's unconquered effort, after he reached his first-ever double century with a four off Karan Patel, lasted 346 minutes and 272 balls. It was also the highest score by a wicketkeeper batsman in the tournament's history.

The Bengal and India stumper struck 6 sixes and 26 fours in this important knock that has come before the selectors sit down to choose the Test team for the one-off game against Bangladesh in Hyderabad next month.

Saha had got injured after playing in the first two Tests in the five-game series against England and his place in the team had been taken by Gujarat skipper Parthiv Patel. Parthiv had led his state to the Ranji crown for the first time by defeating Mumbai in the final.

Rest had more or less ensured victory last evening itself as they needed 113 runs with Pujara and Saha, who counter-attacked the bowling with gusto when his team was in deep trouble at 63 for four, firmly entrenched.

The duo sailed along merrily on the fourth morning with Pujara duly compiling his 6th hundred of the first class season, including three in Tests, and 37th overall before Saha went past his previous career-best score of 178 made in the Ranji Trophy against Assam seven years ago in Kolkata with a couple to square leg.

Saha later reached his double ton just in time as Pujara completed the task soon after with another boundary hit.

The limited Gujarat bowling resources were ruthlessly exposed by the two batsmen in the second innings after they had bundled out Rest for a measly 226 in the first.

Left arm spinner Hardik Patel was the most successful bowler with figures of 2 for 104 while the other two wickets were shared by medium pacer Mohit Thadani and off spinner Karan Patel.

Chintan Gaja, who bowled very well and exploited the wicket in the first essay to take 4 for 60, disappointed in the second to remain wicket-less after conceding 66 runs.