Overnight IPL stars Md Siraj and T. Natarajan might have signed huge deals, but it wouldn’t have been possible without the help of their parents. 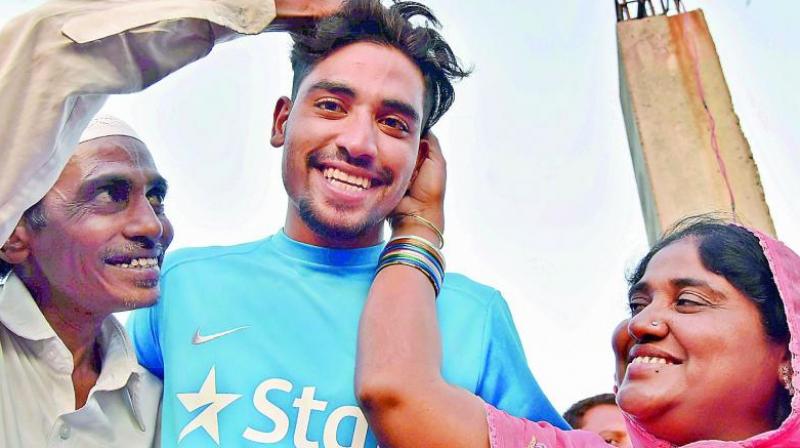 Mohammad Ghaus has been driving an autorickshaw in Hyderabad for the last 25 years. His day would typically start at 7 am and end at 9 pm, when he would go home to his family of two sons — Md Ismail, Md Siraj — and his wife, Shabana Begum, who would be equally exhausted, having cooked in several homes.

Thousands of kilometres away, in Tamil Nadu’s Chinnappampatti village, Thangarasu, a daily wage earner and his wife, Santha, earned a little from a stall where she sold snacks, barely enough to take care of their five children, the eldest being T. Natarajan.

Without their children — Md Siraj and T. Natarajan — who landed a sweet deal of Rs 2.6 crore with Sun Risers and Rs 3 crore with Kings XI Punjab respectively, this would have been just another story of a family that struggled to make ends meet.

But, for the two cricketers, if it wasn’t for their family, they would have been just “another boy” from an impoverished family.

A story of sacrifice
Today, Md Siraj is a busy man with hardly any spare time, but there was a time when things were difficult for the cricketer. “I was very tired with Siraj. He was so into cricket that he wouldn’t pay attention to his studies. I would scold him and even beat him up... but he would never say a word... So great was his love for the game that we never had the heart to stop him from playing despite not having the money,” says Shabana Begum, the cricketer’s mother.

For a family where putting food on the table was a difficult task, pushing their son to follow his passion was not easy. “We wanted them to get a good education, but when we saw how good Siraj was in cricket, I told him that he must never stop living his dream. I couldn’t let that kind of talent go to waste,” says Ghaus. While Shabana adds, “We took loans, worked for longer hours and did extra work to make some more money, because we knew that our kid was worth the effort.”

While Ghaus fought tooth and nail to make sure his son achieved his dream, ironically, he has never seen him play. “I was never around to watch him play. I heard of his good cricket skills. Now, hopefully I will have the time,” he says.

Humble beginnings
Fifty five-year-old Thangarasu and his family’s life has also changed drastically, and he too recalls the struggle. “We come from a low class background and it wasn’t easy to raise five children and run the house. I am a daily wager in a powerloom and my wife Santha runs a shop that sells chicken snacks. There were times when the children went to bed without having dinner. But no matter what, we gave them education and freedom to choose their careers,” says Thangarasu, adding, “When Natarajan started showing interest in playing cricket, we didn’t know how to help him. But my son was very particular in pursuing the sport. We did our best for him and all the four siblings were supportive of their elder brother.”

Though Natarajan doesn’t want his parents to continue their work, Thangarasu says, “We couldn’t ask for a better life than this. But my wife Santha and I will not stop our work. We don’t wish to sit idle. I always tell my kids that they shouldn’t forget their roots and be grounded and kind.”

Natarajan, who is currently in his village near Salem, has already started preparing for the big matches ahead. “My parents and siblings have sacrificed a lot for me. I will never let them down,” he says.

With inputs from Merin James