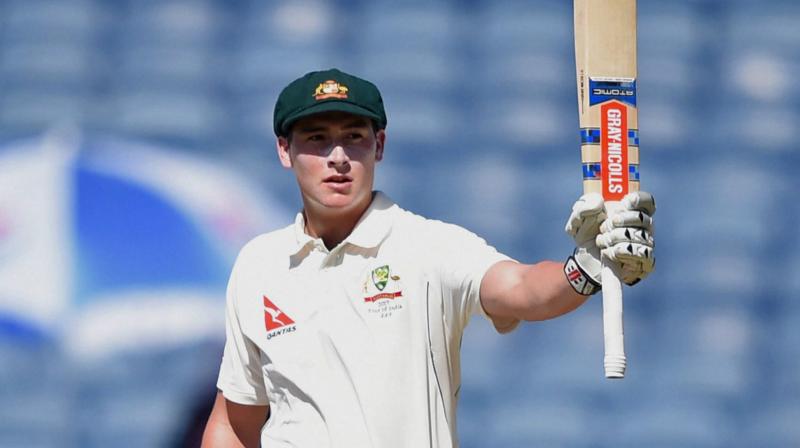 Australian player Matthew Renshaw celebrates his half century on the first day of the first test match against India in Pune. (Photo: AP)

Pune: Australia’s lanky opening batsman Matthew Renshaw 68 (156b, 10x4, 1x6) used his reach to play superbly on the opening day of the opening Test match against India here. The 20-year-old put on an opening stand of 82 with the experienced David Warner before retiring ill as soon as Warner was castled by Umesh Yadav.As Warner was walking back, Renshaw then on 36 followed him. His skipper Steve Smith wasn’t impressed and later former Aussie greats like Alan Border and Michael Clarke criticised the youngster.

“The situation developed suddenly. I was struggling and had a chat with Warner regarding it 10 minutes before he got out and there were still half an hour left for lunch. When he got out I had a conversation with the umpire and he told me you can retire ill. But I wasn’t sure whether I can come back, After I made it sure I just ran out and Steve Smith wasn’t too thrilled about it,” Renshaw quipped.

“It wasn’t an ideal situation to be in but when you have to go to the toilet you just have to go. Later we had a chat and he (Smith) is a good guy and understood. It was challenging to wait to bat again, as an opener I am not used to it. I didn’t want to let my team down and wanted to make sure we had a pretty good day so I came to bat again,” said Renshaw after stumps.

Virat Kohli introduced Ashwin as early as in the second over but Renshaw felt they were expecting it on that pitch. “I have never played on such a pitch. I went with an open mind and tried to bat as long as possible as we do in Australia. But we were expecting it and had chat about it. It was a challenge to face Ashwin first up and I enjoyed it whether it was with the new ball or old ball,” he said.

The youngster felt Australia had a great day especially with the unbroken last wicket stand of 51 runs between Mitchell Starc (57 not out) and Josh Hazlewood. “It was a good day for us, that 50 partnership made it great day and it was good confidence-building. Starc played an attacking innings and it helped us massively,” he said.

India batting coach Sanjay Bangar also defended Renshaw. “You have to answer nature’s call. No amount of mind and will power can control it, such incidents do happen and add colour to Test cricket. Credit to him, he came back well and showed great character,” Bangar said.