The score seems a fighting one considering the dry state of the pitch on the opening day of the first Test. 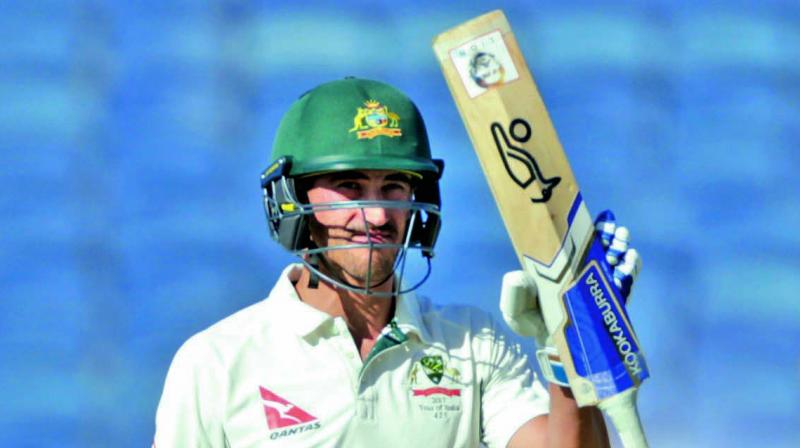 Mitchell Starc celebrates his 50 on Day One of the first Test against India in Pune on Thursday. (photo: PTI)

Pune: Australia showed some initial fight but India’s bowlers reigned supreme in the next two sessions to have Australia tottering at 205/9 before Mitchell Starc counter-attacked with a 47-ball fifty to take the visitors to 256/9 in 94 overs.

The score seems a fighting one considering the dry state of the pitch on the opening day of the first Test at the Maharashtra Cricket Stadium here on Thursday.

Matthew Renshaw 68 (156b, 10x4, 1x6) played superbly for the visitors in two instalments and gave Australia good platform with an opening stand of 82 alongside the experienced David Warner. But the Aussies failed to capitalise on the start on a difficult pitch which is showing signs of early wear and tear.

Starc (57 not out in 58 balls) struck five fours and three sixes and added 51 runs in 51 minutes for the unfinished last wicket stand with Josh Hazlewood to lift the mood in the camp.

The pitch was the talking point as it was dry and the odd ball misbehaved. Virat Kohli introduced Ashwin as early as in the second over to after the Aussies opted to bat first. But Warner was vigilant in company of Renshaw, who took bulk of the strike. Both relied on quick singles as runs were hard to come by.

Ashwin who bowled 16 overs in first session, thought Renshaw had nicked one to Wriddhiman Saha in the 10th over and Kohli went for a review which was turned down. Jayant Yadav rattled Warner’s bails on a no ball.

Yadav bowled his first over just 15 minutes before lunch and he made immediate impact, getting Warner played on. He scored 38 off 77 balls during a 100-minute vigil at the crease and struck six boundaries. Renshaw was retired ill on 36 and the visitors had a new pair of Smith and Shaun Marsh at the crease.

India lost both reviews when Kohli went to check a lbw decision against Smith but the Umesh ball was sliding down leg. Jayant was brought back into the attack and gave away the odd loose ball but struck as Marsh missed a paddle sweep and ball bloomed straight to Kohli at leg slip.

Peter Handscomb (22) was playing well until he missed the line of a Jadeja straight delivery and was trapped leg before. Smith’s 95-ball vigil was ended by Ashwin who got the Aussie skipper to play straight to Kohli at short midwicket as two wickets fell on 149. Smith just made 27. India took three wickets for 69 runs in 30 overs of the mid session.

Mitchell Marsh (4) fell immediately after tea to Jadeja as Australia had half the side in the pavilion with 165 on the board. The 20-year-old Renshaw became the youngest Australian to score a half century in India.

Fast bowlers bowled just 14 overs in the first 75 as Umesh came back and struck immediately to dismiss Matthew Wade (8). Renshaw gave catching practice to Murali Vijay at second slip as Ashwin bowled a beauty from round the stumps. Umesh then removed Stephen O’Keefe and Nathan Lyon in successive balls before Starc and Hazlewood took their team through to stumps.