Australia reached 143-4 at stumps on day two, which saw a total of 15 wickets fall at Pune's Maharashtra Cricket Association Stadium. 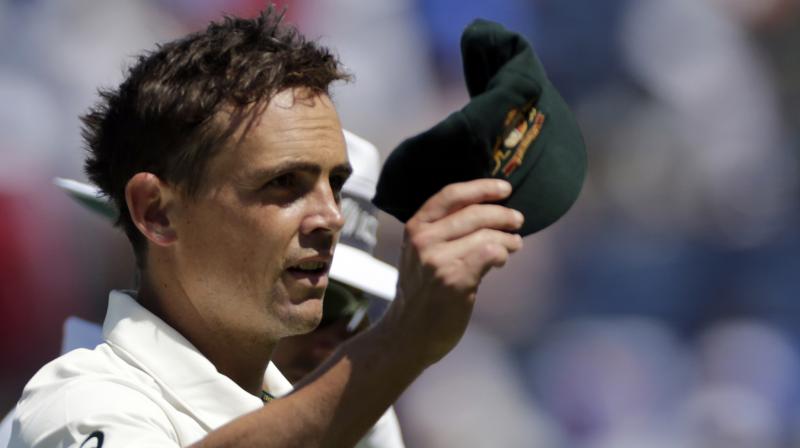 Pune: Left-arm spinner Steve Keefe grabbed a career-best haul of 6-35 to put Australia on top before skipper Steve Smith compounded India's misery with an unbeaten fifty in the first Test in Pune Friday.

The visitors reached 143-4 at stumps on day two, which saw a total of 15 wickets fall at Pune's Maharashtra Cricket Association Stadium.

O'Keefe, whose six wickets came off just 24 balls, helped Australia bundle India out for 105 in the afternoon session before the visiting batsmen rammed home their advantage against the world's top Test team.

Smith on 59 and Mitchell Marsh on 21 were at the crease as Australia stretched their lead to 298 runs on a turning track at India's newest Test venue.

Smith, who was dropped three times, went on to register his 21st Test half-century in his 51st match.

First innings top-scorer Matt Renshaw, who did not open the batting after staying off the field with nausea during most of India's innings, hung on with Smith for a 52-run partnership.

Renshaw (31), who also had to temporarily retire ill with a stomach upset during his first innings knock on Thursday, once again found it hard to cope with the heat as he suffered from bouts of dehydration.

But the Indian fielders were also left feeling the heat as they dropped four catches.

Ishant Sharma finally clung on to a skier at long-off after Renshaw mistimed a hit off Jayant Yadav.

Smith then steadied the innings with Mitchell Marsh as the duo tackled the spinners with aplomb.

But it was O'Keefe who stole the show earlier in the day with a blitz of wickets after lunch that saw India's middle and lower order crumble as the hosts conceded a 155-run first innings lead.

O'Keefe went well past his previous best of 3-53 against Pakistan at Sydney in just the fifth match of his Test career.

The 32-year-old's stunning exploits put Australia in charge of the first match of the four-Test series but it was a day to forget for Indian captain Virat Kohli, who was dismissed for a rare duck.

Kohli, who has hit four double centuries since July last year, walked after just two deliveries for his first duck in a Test since playing against England in August 2014.

Paceman Mitchell Starc, who had already made an impact with his gritty 61 in Australia's first innings score of 260, took two wickets including the prized scalp of Kohli.

Indian opener Lokesh Rahul top-scored for the home side with a gritty 64 but hurt his shoulder while going for a mistimed heave at long-off and did not take field.

The number-two ranked Australia, who lost their last nine Tests in Asia, are looking for an upset win against the world's top side.