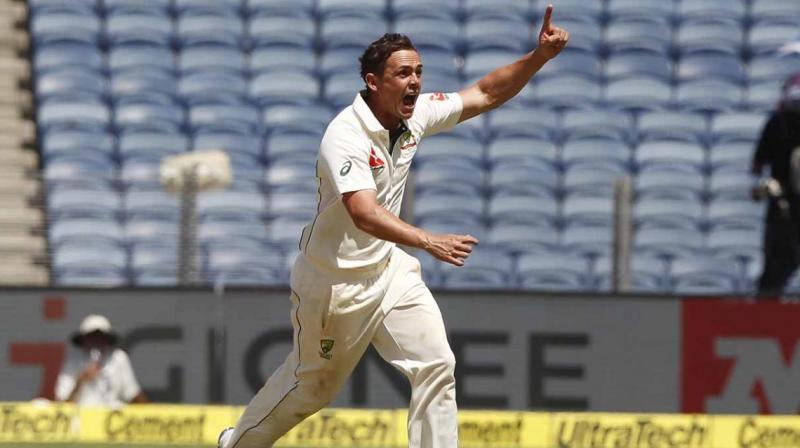 Steve O'Keefe, whose six wickets came off just 24 balls, helped Australia bundle India out for only 105 in the afternoon session of day two. (Photo: BCCI)

Pune: Australia finished Day 2 of the first Test against India at 143/4, in Pune. The visiting team have taken a lead of mammoth 298 runs on a bowler friendly pitch.

India were outplayed by the Australians in all three departments - batting, bowling and fielding. The no. 1 Test team were bowled out for 105 in their first innings, with skipper Virat Kohli getting out for a rare duck.

Skipper Steve Smith on 59 and Mitch Marsh on 21 were at the crease as Australia stretched their lead to 298 runs. Ravichandran Ashwin picked three wickets in the second innings.

But it was O'Keefe who earlier stole the show with a blitz of wickets after lunch that saw India's middle and lower order crumble as the hosts conceded a 155-run first innings lead.

The 32-year-old's stunning exploits saw India concede a 155-run first innings lead -- with captain Virat Kohli was dismissed for a rare duck -- and put Australia in charge of the first match of the four-Test series.

Kohli, who has hit four double centuries since July last year, walked after just two deliveries for his first duck in a Test since against England in August 2014.

Indian opener Lokesh Rahul top-scored for the home side with a gritty 64 as eight Indian batsmen failed to get into double figures.

India went to lunch 70-3 and got to 94 without further loss before O'Keefe, who had been largely ineffective during the morning session, swung control of the match to Australia.

He claimed three wickets in his 10th over to leave the Indian middle-order rattled at India's newest Test venue, which has seen considerable turn from the beginning.

The wickets of Rahul, Ajinkya Rahane (13) and Wriddhiman Saha (0) broke India's batting back and there was no looking back for O'Keefe in just his fifth ever Test.

India lost their last seven batsmen for a paltry 11 runs to post a first-innings total of just 105.

Mitchell Starc and Josh Hazlewood had put India in trouble as the pace bowling duo has scalped three quick wickets on day two of the opening Test here on Friday.

While Hazlewood removed Vijay, Starc dismissed Cheteshwar Pujara and Virat Kohli in an over to give Australia a chance to dominate the hometeam at the Maharashtra Cricket Association Stadium.

India made sure Australian innings did not last long on day two of the opening Test here on Friday after R Ashwin dismissed Mitchell Starc in the first over of day's play.

Australia would have harboured hopes of scoring 300 runs after Starc and Josh Hazlewood's last-wicket partnership on day one did not allow India to end Australian innings quickly after being reduced to 205/9.

Overnight batsman Mitchell Starc was dismissed for 61 as Australia were bowled out for 260 in the first over on day two of the opening Test against India.

While Renshaw anchored the innings, it was Starc who brought back Australia from the brink after they were reduced to 205-9 in the final session of play on the opening day.

The left-handed Starc, better known for his fast bowling, struck six boundaries and three sixes during his 63-ball stay at the crease at India's newest Test venue.

Starc put on a gritty 55-run last-wicket stand with Josh Hazlewood (1 not out) to give the visitors what seems like a fighting total on a typically turning Indian pitch.

The 82-run opening stand between Warner and Renshaw, who retired ill with an upset tummy only to return and register his second Test fifty, was the highlight of the innings.

The match is the first in a four-Test series between the world's two top-ranked sides.