Playing with an existing injury has probably given Poonam the impetus to perform better. 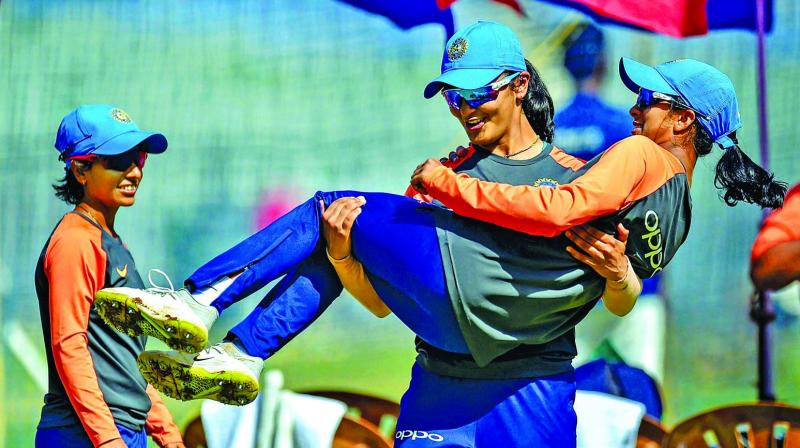 Big surprises come in small packages as India fans and team Australia found out at the Sydney Showground Stadium three days ago. Standing at 4 feet and 11 inches, Poonam Yadav stopped the hosts (and defending champions) in their tracks in the first fixture of the International Cricket Council Twenty20 Word Cup (T20WC). (Photo: PTI)

Big surprises come in small packages as India fans and team Australia found out at the Sydney Showground Stadium three days ago. Standing at 4 feet and 11 inches, Poonam Yadav stopped the hosts (and defending champions) in their tracks in the first fixture of the International Cricket Council Twenty20 Word Cup (T20WC).

Facing a below par total of 133 runs, the Aussies were jolted by Yadav’s spell of 4 wickets for 19 runs, the best in the tournament’s history to give team India two valuable points at the start of their campaign. Coming into the match with a fractured forefinger in her left hand (she bowls leg spin with the right) Poonam showed no signs of lack of match practice and leapt back to form with a dream spell.

Spin is always going to be team India’s go to factor in this tournament. They have been placed in the group of death — with two top contenders, the hosts and New Zealand in Group A. Beating the top side always gives a big boost to the morale of any team and undoubtedly the squad led by skipper Harmanpreet Kaur must be on top of the world, down under.  In Yadav and Rajeshwari Gayakwad, they have two experienced bowlers who can hold the team in good stead.

The daughter of a retired Army officer, Agra-bred Poonam has a unique delivery which reaches the batsmen as slow as slow can get. She tosses the ball high up in the air, creating a loop which entices an attacking thought into the batters’ mind. Mixing googlies with the traditional leg spin, Poonam tends to test the batters patience with the ball taking its time to pitch on to the surface.

Coaches always say that balls that are tossed up above the normal eye level put a doubt in the batsman’s mind, which is exactly what Poonam did. If the tiny lady kept pulling rabbits out of her hat with a constant supply of wickets for the team, another equally diminutive member, Taniya Bhatia gave superb support behind the stumps with a match haul of two catches and two stumpings.

Playing with an existing injury has probably given Poonam the impetus to perform better. The 28-year old had her forefinger crushed while training at the National Cricket Academy in Bengaluru two months ago and had a plate inserted as a remedial measure. Missing the all important T20WC would have been the first thing her mind. The way she came back into the team with the backing of team coach WV Raman and getting herself fit to tour Australia shows the mettle she is made of.

Cricket history has many such acts of courage where cricketers have put their team and the cause above themselves. Legendary Indian spinner Anil Kumble will always be remembered for bowling 14 consecutive overs with a broken jaw in the West Indies during the Antigua Test of 2002 with a bandaged face. That act will always have the same space as his remarkable ten wicket haul against Pakistan at the Ferozeshah Kotla, in Delhi in 1999.

Malcolm Marshall coming out on the field at Headingley with a plastered left hand (thanks to a double fracture to his thumb), bowling and batting in the Test match against England. The remarkable deed spurred his team to black-wash England 5-0 in 1984. His skipper Clive Lloyd rated Marshall’s heroism as one of the ‘greatest and most courageous acts.’

Putting the team above self is what real cricket is all about. One hopes Poonam’s courageous act will inspire team India on their journey in the T20WC. The team looks well balanced and has the arsenal to cause an upset, as was seen during their outing against champions Australia. Furthermore, skipper Harmanpreet and ace opener Smriti Mandhana have played the Women’s Big Bash League in the host country and are aware of the challenges that are on offer down under.

With extreme success comes complacency as we saw during the ICC Under-19 World Cup where India lost after a fabulous show throughout the tourney. Indian women will need to guard against that factor as they take on lesser ranked teams like Bangladesh and Sri Lanka.

India’s next match is against Bangladesh at Perth on 24th February, followed by a very important game against New Zealand at Melbourne on the 27th of this month. It is imperative for the team to stay focused on the goal and not let the win against the Aussies put their guard down.