Steve Smith was happy meeting apostle of peace as not everyone gets to meet the Dalai Lama. 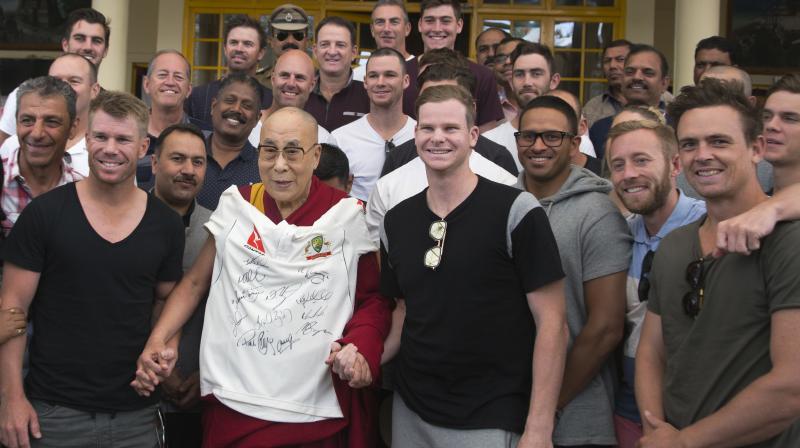 “He (the Dalai Lama) is all about compassion and fondness for each and every human being. It was nice to hear from someone as prestigious as the Dalai Lama,” said Steve Smith after Australian cricket team’s visit to the global leader. (Photo: AP)

Dharamsala: Australian skipper Steve Smith revealed Friday his team held a relaxing session with the Dalai Lama where they learnt about keeping their cool, just a day ahead of the high-pressure series decider against India.

Smith was happy meeting apostle of peace as not everyone gets to meet the global leader.

Later, the Australia captain himself revealed that he had asked the noble laureate about how to get a peaceful sleep during a high-pressure Test match.

Asked about the meeting, Smith said: "Yeah, it was great. I asked him (His Holiness) a question about sleep and how he could help me and he gave me his blessings. We rubbed our noses together, and (he) gave me some blessings, so hopefully it’ll help me with my sleep over the next five days."

The Australian team proved to be lucky that they got to meet the spiritual leader as the touring England team in 2013 visited the monastery but could not meet him.

Asked what the team can take from meeting the Dalai Lama, Smith said: “Probably relaxes a little bit. He is all about compassion and fondness for each and every human being. It was nice to hear from someone as prestigious as the Dalai Lama.

"It was a wonderful experience for all of us. If we can learn anything from it, we probably get overboard at times as cricket is a tough game. At the end of the day, it is just a game and you need to realise it and perhaps that is what the team can take forward."