India vs Australia: All set for grand finale

With trophy at stake, teams will go in search of win. 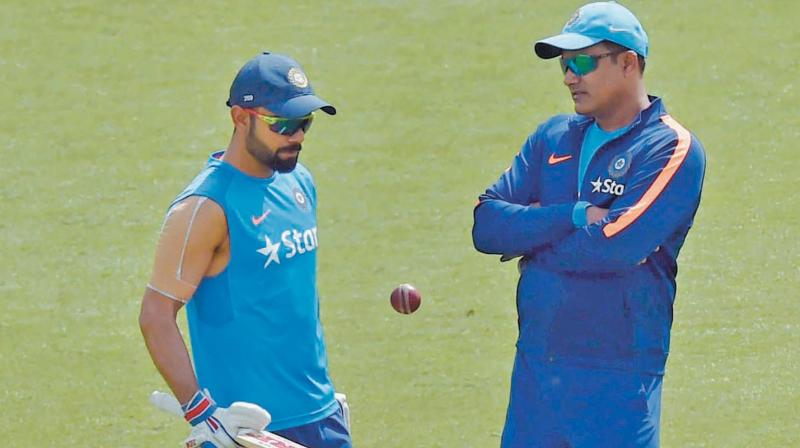 Skipper Virat Kohli and coach Anil Kumble have a lot on their minds. (Photo: PTI)

Dharamsala: With India and Australia clashing in a winner-takes-all finale to an enthralling series, the picturesque town of Dharamsala in the Himalayan foothills could hardly have asked for a better debut as a Test venue.

Both hosts and tourists emerged with their share of glory from the drawn third Test in Ranchi to leave the four-match series on knife-edge at 1-1 going into the decider, which starts on Saturday.

While popular wisdom has it that Test cricket must produce more results to survive the onslaught of the limited-overs game, there can be little doubt that the drawn third Test, also at a new venue, produced the best contest of a thrilling series.

Cheteshwar Pujara’s more than 11 hours of over-my-dead-body defiance for India was matched by a game-saving final day rearguard action from Australians Peter Handscomb and Shaun Marsh.

After just one hundred in the first two Tests in Pune and Bengaluru, Ranchi also embarrassed the pitch pundits by yielding four centuries, including Pujara’s epic 202.

The teams have since moved to the Himalayas and, with so much at stake, the expectation is the level of cricket will be just as high when the top two sides in the world rejoin the fray under Dharamsala’s snow-capped mountain peaks.

Australia skipper Steve Smith believes the momentum is with his team, who only need a draw to retain the Border-Gavaskar trophy but will have their eyes on a first series triumph in India for 13 years.

“I’m sure they’re hurting a little bit in their change room,” Smith, who made an unbeaten 178 in the first innings in Ranchi, said after Australia’s great escape.

“If there’s anything with momentum in cricket it’s probably on our side at the minute. It’s 1-1 all and we have decider in Dharamsala which is really exciting.”

Virat Kohli has rarely seen eye to eye with Smith on any issue in what has been a fractious series and the India captain predictably differed on the matter of momentum.

“It’s a matter of individual perception... we’re happy where we positioned ourselves,” Kohli said, pointing out his team were not required to bat again after racking up 600-plus runs in their first knock.

For Australia, the immediate concern is the recovery of their bowlers from their staggering 210-over toil in India’s first innings in Ranchi. Kohli will be eyeing an element of personal redemption in the final match of India’s 13-Test home season, having managed only 46 runs so far.