Hawaiian cricket is all about wind, waves and wings...

The HCC is the oldest such establishment in the Pacific and the second-oldest in the USA. 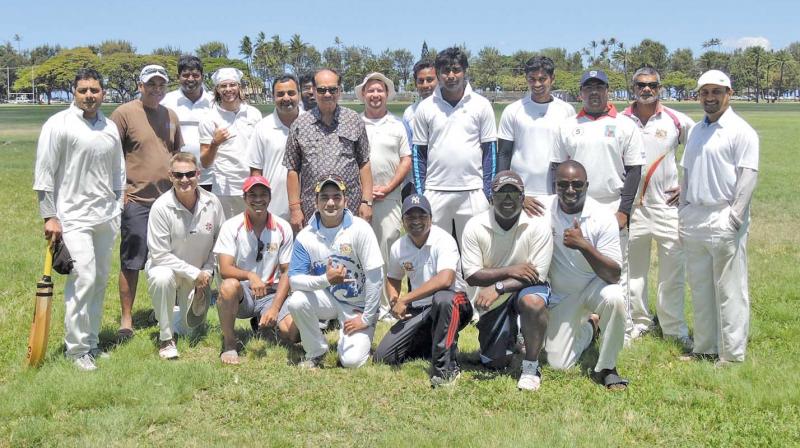 The Honolulu Cricket Club is the oldest establishment in the Pacific and the second-oldest in the USA.

Cricket came to Hawaii through Christian missionaries, sailors and British entrepreneurs in the sugarcane trade. There is a record in the Hawaiian Gazette of a match between officers of the ship Restorer and the Honolulu Cricket Club in 1890.

Cricket received royal patronage in Hawaii where King Kamehameha IV used to play the game on the palace grounds and founded the Honolulu Cricket Club in 1893. The monarch felt threatened by the territorial designs of the USA and decided to align with Britain in the middle of 19th century. To reinforce their strong links with the House of Windsor, Queen Lili’uokalani even travelled to England for Queen Victoria’s Golden Jubilee celebrations.

Records reveal that J.C. Penny was a ferocious fast bowler who took seven wickets in a local competition and when he bowled a batsman, the bails went flying a distance of 32 yards.

The two World Wars, however, dealt a deadly blow to cricket in Hawaii and by the time competitions recommenced in 1950, spectators were ignorant of the game and thought that it was lacrosse or croquet being played.

The serene Pacific Ocean, lush tropical climate, and its location near the beach dotted with date palm, iron wood and banyan trees, provide an ideal setting for the Honolulu Cricket Club that caters to the game in the island.

The Three Ws of Caribbean cricket are represented in Hawaii by winds, waves and wings (of bird) a harmonious ambience for the most idyllic of cricket venues.

The HCC is the oldest such establishment in the Pacific and the second-oldest in the USA. The clash between the HCC and the Maui Cricket Club for the Hawaiian Friendship Cup (natives call it the Alexander Liholiho ‘IpuPiliaoha O Hawaii’) is eagerly awaited by local enthusiasts every year.

There are two British cricket clubs, besides the Samoan Cricket league where competitive cricket is played. With the sport finding a firm footing in the island, the Hawaiian Premier League (T20 competition) was first organised in 2008.

Three teams — the Master Blasters, The Spitting Cobras and Terminators — took part in the inaugural tournament. Cobras claimed the cup, winning by 33 runs, helped by Mark Berwick’s maverick 99 from 47 balls.

Last year in an exciting final, Sunset Slashers beat Hawaiian Super Kings by a solitary run. Efforts are under way to have T20 Polynesian Championship in the near future as well. It is interesting that the main cricket ground, the Kapiolani Park, is the only venue to stage regular night cricket in the USA. Besides Berwick, other prominent Hawaiian players include Lazar Joseph, Subbu Raman, Aditya Singh, Pankaj Bhanot, Lyle Carden, Owen O’Callaghan, Sachin Shah, Bishnu Ramsarran, Yudesh Redhi, Matt Barrett, Vinoo Ganapathy, Nevin Field, Sam Bashir and Harsha Chaudhary.

Sadly there is no indigenous Hawaiian player currently active but occasionally Polynesian players have figured in the competition.

Hawaii has Asian, Caribbean, European, North American influences along with its own native culture and all blends well but does not give a distinctive flavor to its cricket. Cricket in Hawaii has an international flavor with nearly two dozen countries contributing to the team’s composition which Berwick rightly calls, ‘a United Nations of players”.

With the ‘aloha spirit’ to back them, the HCC team have ventured abroad to test their skills against Canada (2009), New Zealand (2010) and India (2011). In the coming three years tours have been planned for Singapore and Malaysia, New Zealand, South Africa, Tanzania, England and Scotland.

The step-motherly treatment meted out to the Hawaii by the USACA has forced the HCA to request ICC for permission to compete in the ICC championships of the Pacific region against Cook Islands, Fiji, New Caledonia, Papua New Guinea, Tonga and Western Samoa. The move is based on the rich talent available as compared to the other Pacific teams.

(The writer, who continues to take keen interest in cricket, was recently in Hawaii)