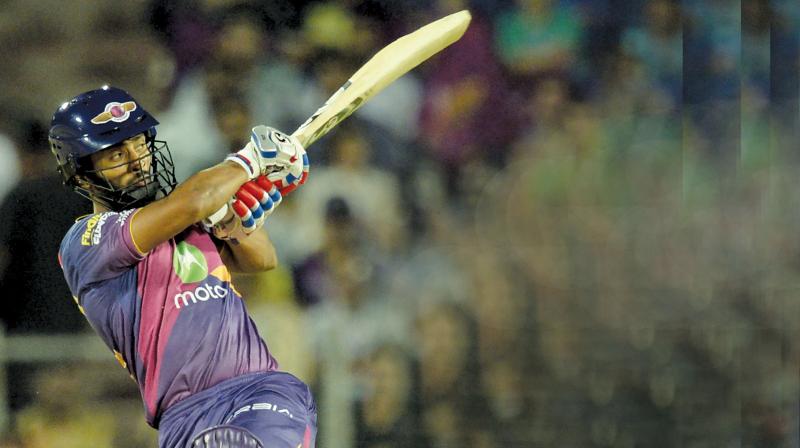 Rahul Tripathi has stayed in Gangtok, Uttar Pradesh, Jammu and Kashmir before being stationed in Khadki, Pune, due to his colonel father Ajay Kumar’s defence job. However, never had he covered a long distance in a short time like he did during the tenth edition of Indian Premier League. The Ranchi-born cricketer is a medium fast bowler who has played for Deccan Gymkhana in Pune and has hit six sixes twice in local tournaments. He has been representing Maharashtra as an all-rounder at the domestic circuit since 2012.

Rahul caught everyone’s imagination in his maiden IPL season by some breathtaking batting performances for Rising Pune Supergiant in their passage to the irmaiden final. Tripathi emerged the second best scorer for Pune, after skipper Steve Smith, with 391 runs in 14 games. He was picked for `10 lakh in the February IPL auction and got his chance in the third game.

One of the highlights of the tournament was his 93 against Kolkata Knight Riders, which also included a hat-trick of sixes. He was also nominated among the five batsmen for the “Glam shot of the tournament”, which eventually went to Yuvraj Singh. His age was above the cut off of 23 to be in line for emerging player of the year, which went to Kerala’s fast bowler Basil Thampi. “I had been working hard and it was a big opportunity for me at a big stage. RPS coaching staff showed belief in me, and gave me a big break. I wanted to give my best and was preparing accordingly to do well at this level and in the nets also. I am happy we reached the final and I contributed to it,” he said.

The 26-year-old bowler opened the innings with an experienced player like Ajinkya Rahane from the fourth match onwards, after Mayank Agarwal failed to impress and Rahul kind of overshadowed the talented Mumbaikar before the playoffs. “It was a big experience to open with Rahane. His gave me tips and guided me, which worked for me. He taught me how to tackle extra pace during the first and second matches. When we batted together, he praised my intent. I learnt a lot from him,” Rahul said, giving credit to seniors such as Rahane, Smith and Mahendra Singh Dhoni for his good performances. “Their experience and motivational words was a big factor. Even in the nets and practice match, Steve Smith praised me and that I was batting well and that gave me confidence. When I first saw Mahi bhai, I was nervous to have my idol in front of me. But before the first match, he told me not to be nervous and go and express myself, which motivated me. Luckily, everyone helped me at every stage and didn’t let negativity and pressure crop up in my game,” he said.

Reflecting on his flawless hitting, well-timed shots with straight bat that made a pleasing sound during his knocks, he revealed that he just sees the ball and goes with the flow. “I wanted to stay in good shape when playing shots in Twenty20 cricket. I adjusted to the pace, focused on middling the ball and kept my mind blank to play shots after they were pitched and react accordingly. I wasn’t thinking too much as that affects your batting. It helps when I keep my mind blank,” he said. Rahul, who won the M A Chidambaram Trophy for the best U-25 cricketer in 2014 wants to keep on playing cricket with a blank mind and hopes to play for India some day, which has been the goal of his father from the start. “My family has supported me all through. The aim is to play for India and for that I have to keep performing,” he said.