The hearing for the Level 3 offence is scheduled on July 10. But this is of far lesser significance in the immediate future. 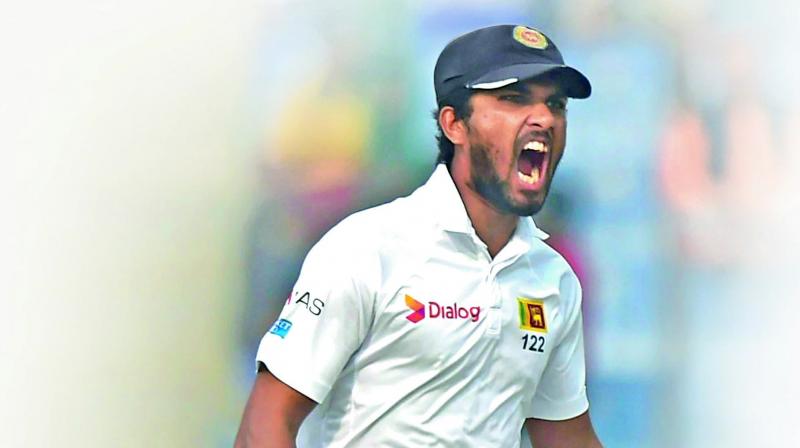 Michael Beloff QC, appointed Judicial Commissioner by the ICC, threw out Sri Lanka captain Dinesh Chandimal’s appeal against his one-Test suspension for changing the condition of the ball in the ongoing series against the West Indies.

Chandimal had been caught on camera trying to apply spittle to the ball shortly after putting a lozenge in his mouth when play was in progress in the second Test at St Lucia. This was seen to be in breach of clause 41.3 of the ICC’s Standard Test Match Playing Conditions.

The Sri Lankans aggravated the situation by refusing to take the field for over two hours after match officials had stepped into the picture and asked for the ball to be changed. In fact, for a while it appeared they might even concede the match.

The recalcitrance of Chandimal, coach Chandika Hathurusingha and manager Asanka Gursinha compelled Srinath to further charge them with a Level 3 offence (conduct contrary to spirit of the game) and impose a five-run penalty on the Lankans when play finally resumed.

The hearing for the Level 3 offence is scheduled on July 10. But this is of far lesser significance in the immediate future. The more serious impact is the one-Test ban on Chandimal, which means Sri Lanka will play the last Test at Barbados without their captain and best player.

That the hearing with Beloff on Friday against the ban lasted almost four hours suggests that the case against Chandimal was not open and shut. The Lankan cricket establishment for the most stands behind its captain, though this support has not been voluble.

The circumstantial evidence is incriminating, though, even if it does not make intent to change the condition of the ball as palpable as was the case with Australians Steve Smith, David Warner and Cameron Bancroft against South Africa earlier this year.

The larger issue, of course, is about cricket’s rules and code of conduct vis-à-vis players. When Smith and Co were found guilty, the cricket world was thrown into turmoil. But in three months or so the problem has erupted again.

This shows — if at all it was necessary — that the problem of ball tampering is endemic. But what boggles the mind is the temerity of players. One would have thought that the episode involving Smith & Co would have had a chastening effect. Obviously not!

It is instructive that in both these cases, the buck stopped at the captain. Unlike Chandimal, Smith was not directly involved in changing the condition of the ball, but it was at his (and vice-captain Warner’s) behest that young Bancroft did what he did.

To a large extent this shows the pressure captains are under to win. Expectations from administrators and fans are enormous (not to mention peer group acceptance and sponsor support) and the urge to test the boundaries of legitimacy tends to override threat to reputation and career.

There is also absence of deep fear because the punishment is not severe. A one-match ban — and that only if you are caught — may not seem an unduly high risk when chasing victory and its accompanying rewards.

That Smith, Warner and Bancroft, it must be remembered, copped a one-year ban was beyond the ICC stipulation. It arose out of a deep sense of shame and anger in Australia, compelling the country’s cricket board to take a far stronger position.

It’s pertinent at this stage to focus on Smith & Co in their current situation. The one year ban — in the context of prevailing rules — was harsh. But what’s happened subsequently has been farcical.

Smith and Warner, while ineligible to play first class or international cricket in and for Australia, have been allowed to play in T20 leagues in Canada and (later) in the Caribbean.

True, stopping them could lead to a restraint of trade legal issue, but for them to make a lucrative living while still living out the punishment makes a mockery of the ban.

It sends out a signal that cheating can have its rewards, one way or the other.