Jadeja struck 58 off 112 deliveries and shared a crucial 60 runs with Ishant Sharma (19) for the eight wicket. 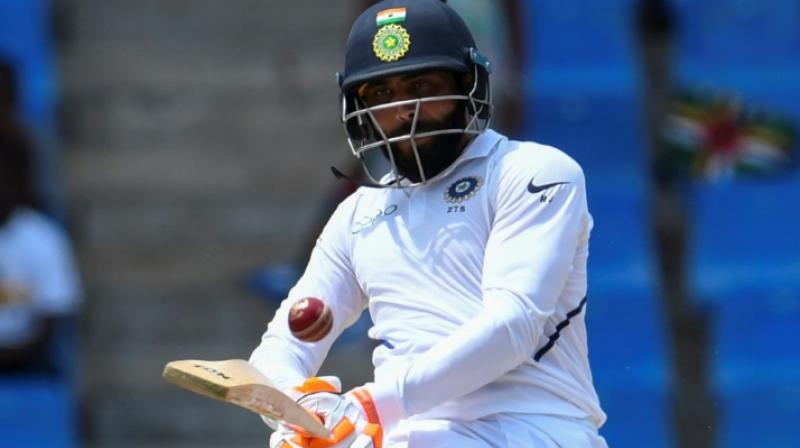 Senior off-spinner Ravichandran Ashwin and chinaman bowler Kuldeep Yadav were left out while Jadeja got the nod in the playing XI. (Photo: AFP)

North Sound: Ravindra Jadeja is glad that he could repay skipper Virat Kohli's faith in him with a gritty half-century, ignoring the few eyebrows being raised over his inclusion for the first Test against West Indies.

Jadeja struck 58 off 112 deliveries and shared a crucial 60 runs with Ishant Sharma (19) for the eight wicket, helping India reach 297 all out in the first innings. By the wend of second day's play, India had taken control of the match as the West Indies trailed by 108 runs with just two wickets remaining in their first innings.

"I did not have any pressure to perform. Obviously you feel good when the skipper believes in you, considers you as main player. It boosts your confidence because your captain is showing confidence on you. Luckily, I have been able to repay the faith by performing well. I will keep doing the same in future also," said Jadeja.

Senior off-spinner Ravichandran Ashwin and chinaman bowler Kuldeep Yadav were left out while Jadeja got the nod in the playing XI. Former captains Sunil Gavaskar and Sourav Ganguly had questioned Ashwin's exclusion.

"When I was batting, I was just looking to build a partnership. I was focussing to play with the tail-enders like Ishant, Shami and Bumrah.

"I was focussing on my game, I was not thinking about what is going on outside, what others think. I was just trying to give my best on the field," said Jadeja who also took one wicket for 58 runs from his 10 overs as West Indies ended the second day's play at 189 for eight in their first innings.

After the fall of Rishabh Pant at the team score 207 for seven, Jadeja and Ishant frustrated West Indies by negotiating the threat posed by the potent pace duo of Shannon Gabriel and Kemar Roach.

Talking about the partnership with Ishant, Jadeja said, "I was constantly talking to Ishant that we should stay in the middle for as long as possible. That was the thought process. We knew if we kept believing in our defence and technique, then we can stay out in the middle. We were not thinking far ahead but taking one over at a time.

"I was positive in my mind, my shot selection was positive. When Rishabh got out, I was talking to Ishant about building a partnership and luckily we had a 50-plus partnership. In Test cricket, if the lower order like number 8, 9, 10 batsmen scored runs, the opponent bowlers get irritated and not good for them (opponents). So, it was the game plan," he added.

"Ishant played well, Bumrah also played well, adding valuable runs down the order. It was a good contribution from the lower order."

He was all praise for Ishant who later returned to grab five wickets to break the back of West Indies innings and tilt the Test in favour of India.

"Ishant bowled well. The two caught and bowled (of Kraigg Brathwaite and Shimron Hetmyer) were remarkable, and I believe those two dismissals were the turning point. For a fast bowler, to take those return catches after so much of bowling is tremendous," Jadeja said.

"On this wicket, you have to bowl in right areas. Ishant's rhythm improved with each over. He was also getting the swing as the ball got older, there was bounce and good carry and I think that helped him.

"If he did not hold on to two return catches, the situation might have been different. Those two dismissals helped us in turning the momentum into our side," he added.

On the nature of the pitch here, the batting all-rounder said, "The wicket has bounce and the ball was also moving a bit in air. The first hour had some moisture and so there was swing and we played well.

"As the game progressed, the wicket has settled down, but the bounce is still there and it is helping the fast bowlers," Jadeja said.