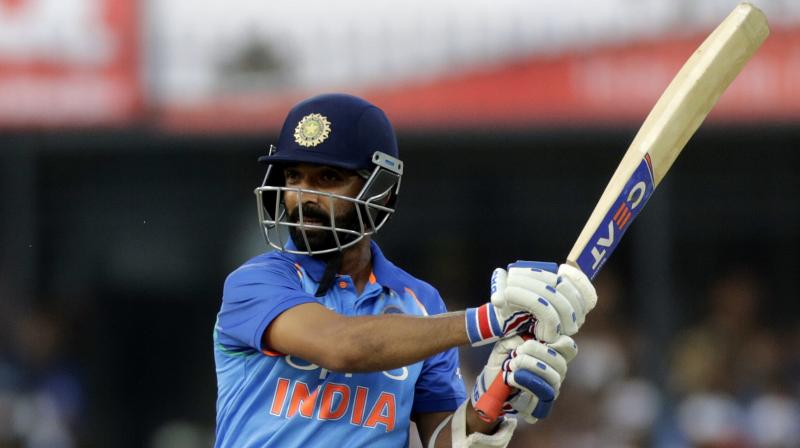 Indore: Team India secured a convincing 5-wicket victory and took a 3-0 lead in the 5-match ODI series vs Australia at the Holkar Cricket Stadium on Sunday. With the win, India also toppled South Africa occupied the no.1 spot in the ICC ODI rankings.

Boosted by the return of the fearsome Aaron Finch, the visitors set up a challenging 293 on board, with skipper Steve Smith playing a crucial half-century. Smith’s men looked like they could cross the 300 mark, but those hopes shattered with Maxwell’s dismissal, as they failed to score big in the death overs.

In reply, Ajinkya Rahane and Rohit Sharma looked in full swing as they set the foundation for the chase with a 141-run partnership. The Men in Blue lost a couple of wickets quick midway, but Hardik Pandya once again came to the rescue.

The swashbuckling batsman set up crucial partnerships with Kohli and Manish Pandey to seal the series.

WICKET! Another masterclass innings from Pandya comes to an end, but it's too late for Australia. The right hander goes for another big one but finds Richardson on the boundary rope. Pandya departs for a well-made 78.

WICKET! Oh dear, another one just after 2 balls. The move to promote Jadhav up the order backfires as the Mumbai batsman nicks one straight to wade. Cross seamer from Richardson and the batsman gets a huge outside edge.

WICKET! It's a big one for Australia as Kohli has to walk back. The India skipper goes for the aeriel route, but is deceived by a hint of a turn and finds Finch at long off.

WICKET! Another one gone, and this time it's Rahane. The batsman tries to flick it to square leg but gets trapped on the knee roll, as the ball skids off the deck. Two new batsmen at the crease now, and it's Pandya.

WICKET! Australia get their first breakthrough. Rohit has played all his short balls well, but fails to get the better of Coulter-Nile this time. Rohit miscues his pull, the ball goes right up in the air and Cartwright at deep mid-wicket takes a safe catch.

What a reply this has been from India. Both Rohit Sharma and Ajinkya Rahane have been playing their shots well and have complimented each other supportively, bringing up their 50s in the process.

In the first innings, Aaron Finch struck a hundred but the Indian bowlers have pulled back the strings to deny Australia a chance to run away with an advantage in the third ODI at the Holkar Cricket Stadium here on Sunday.

Australia, who were cruising at 224/1 till the 37.4 overs after electing to bat, could only score 293 runs by the end of 50 overs and imploded after Finch's dismissal.

Having lost the first two ODI with a below-par performance, Finch's return gave the visitors a huge boost. The Aussies got off to a fine start and despite losing Warner early on, the swashbuckling right-hander ensured he proved a point with a sizzling ton.

With the pitch favouring the batsmen, Finch went after the Indian spinners along with Steve Smith at the end who came up with a supportive half-century, scoring 63.

However, once Kuldeep Yadav broke the 154-run partnership between the two, the Men in Blue bounced back with two quick wickets in succession, dismissing the Australia skipper and Glen Maxwell, who settled well at the crease.

Despite losing partners at the other end, Marcus Stoinis struck a decent cameo to set a target of 293 for the hosts to chase.

WICKET! What a catch! What a footwork! Manish Pandey's presence of mind sends Peter Handscomb packing. The Australian batsman mistimes one towards long-off. Pandey, manning the region, jumps, takes the catch, but the momentum is taking him past the boundary rope. He throws the ball up, goes past the rope, comes back in to complete the catch. All of this, with utter coolness. Jasprit Bumrah has his second. Australia have just imploded with Aaron Finch's dismissal.

WICKET! A breakthrough, finally! Kuldeep Yadav gets his first wicket after a lot of hammering. Aaron Finch hits one straight to Kedar Jadhav in the deep. End of a fine innings of 124. Well played. Can India scalp a couple of wickets in quick succession.

HUNDRED FOR AARON FINCH! Flat track and all that jazz is fine but this is a fine knock from Finch as he brings up a ton. He did not look flustered against the Indian spinners and had no trouble against the pacers as he reached the three-figure mark. He and Smith have troubled the Indian side. Australia must cash in on such a fine platform.

This is top batting from Finch on a comeback. He took his time in the beginning but he is hammering Indian spinners now as he and Smith complete 100-run partnership. Finch into 90s, Australia in with a chance to score 320.

Steve Smith and Aaron Finch have completed 50-run stand and are scoring runs at brisk pace. India need wickets and quickly to stop this freeflow of runs.

Hundred up for Australia and with nine wickets in hand, they are in with a chance to post a big total. India are not leaking runs but Australia managing to score runs at brisk pace.

WICKET! Hardik Pandya has done the trick for India as he sends David Warner packing. The Australian left-hander has started to open his shoulders and just then Pandya struck. Warner misses one and Pandya disturbs the timber. India will be delighted with this breakthrough.

David Warner is making a move as he is cashing in on every loose delivery while Finch is doing his bit to keep the scoreboard ticking. Australia look solid as soon as Finch and Warner join hands at the top. Australia move closer to fifty.

David Warner and Aaron Finch have made watchful start as Australia look for solid foundation at the top; something which they missed in the first two ODIs. While Warner has looked solid, Finch, making a comeback, too has not looked out of sorts.

India are fielding the winning combination from the first ODIs while Australia have made two changes to their team from the Kolkata ODI as fit-again Aaron Finch replaces Hilton Cartwright while Matthew Wade makes way for Peter Handscomb.

Steve Smith has won the toss as Australia elect to bat in the third ODI against India at the Holkar Cricket Stadium here on Sunday.

Although Steve Smith scored a fifty in the second ODI, the Australian batting, without David Warner’s regular opening partner, Aaron Finch, at the top, has looked weak. While Marcus Stoinis did score an impressive fifty at the Eden Gardens, the other have to rise to the occasion if Australia want to save this series.

However, it won’t be an easy task for the visitors as they face the young Indian wrist spinners – Yuzvendra Chahal and Kuldeep Yadav, who took a hat-trick in the second ODI and pacers – Bhuvneshwar Kumar and Jasprit Bumrah – seem to have enough tricks up their sleeves to trouble the Kangaroos.

While Indian bowling is looking in good shape, Indian batsmen; especially Rohit Sharma and Manish Pandey – will need to fire. While a big score has alluded Rohit, Manish has not looked comfortable in the first two matches. India, meanwhile, will want more from Kedar Jadhav as the likes of Ajinkya Rahane, Kohli, MS Dhoni and Hardik Pandya aim to score heavily yet again.

The game on Sunday should be a keenly-fought contest amid reports of rain. While Australia aim to get a win under their belt, it won’t be an easy task as India enjoy 100 per cent win record at the venue.