Sports   Cricket  24 Sep 2019  Eoin Morgan says Jofra Archer is yet to give his best
Sports, Cricket

Eoin Morgan says Jofra Archer is yet to give his best

Archer was rewarded with a central contract for Test and white-ball cricket by the England and Wales Cricket Board (ECB) recently. 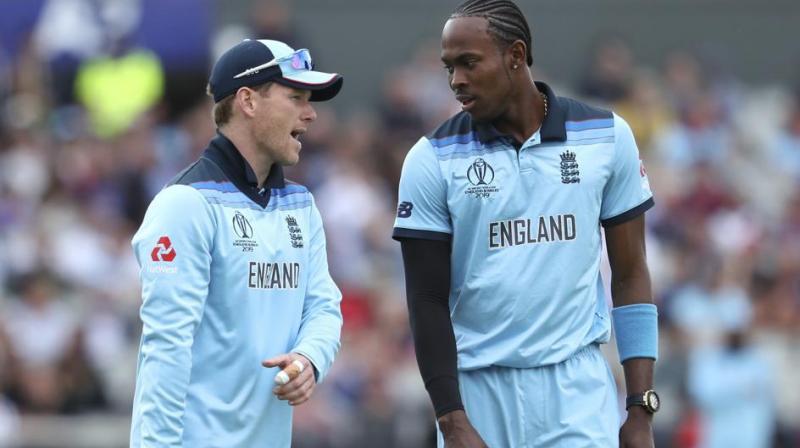 England captain Eoin Morgan on Monday said Jofra Archer has proved to be an ‘X-factor’ in his short career so far but insisted that the best of the tearaway pacer is yet to come. (Photo:AP)

England captain Eoin Morgan on Monday said Jofra Archer has proved to be an ‘X-factor’ in his short career so far but insisted that the best of the tearaway pacer is yet to come.

Archer was rewarded with a central contract for Test and white-ball cricket by the England and Wales Cricket Board (ECB) recently for his superb performances in the ODI World Cup and the Ashes.

And, Morgan was full of praise for the 24-year-old fast bowler, stating that Archer managed to overcome every obstacle that was thrown on him to make his name in world cricket.

“I think it is fantastic. Jofra is very exciting to watch and he bowls fast and has an X-factor. He can bowl in any format of the game and any circumstances and to any plan,” Morgan said.

“Every obstacle that is being put in front of him, he overcame that. We haven’t seen the best of him, he still wants to learn all the time.”

Archer was England’s leading wicket-taker in their triumphant World Cup campaign at home. He then followed up his World Cup performance by scalping 22 wickets at an average of 20.27 in the four Ashes Tests against Australia.

However, it was not a smooth sailing for Archer initially. The Barbados-born cricketer shifted his base to England in 2015 as he held British citizenship through his English father.

But Archer was initially not eligible to play for England cricket team until 2022 because of their residency rules, but the ECB changed the rules and Archer made his debut in May 2019.

“Who would have thought after the World Cup final performance that took absolutely everything that he could come up with, on his own we would win a game (third Ashes Test) at Headingley. “The innings exposed every attribute that you need to be a Test match batsman. It was exceptional,” he said.

Stokes single-handedly guided England to a one-wicket win over Australia in the third Ashes Test at Headingley with a match-winning knock of 135 runs.

Morgan also said that England have now set their sights on next year’s World Twenty20 in Australia after fulfilling their long-cherished dream of winning the ICC ODI World Cup.

“We have 18 T20 International games from between now and then and we will try to build a squad that can potentially win that tournament (World T20),” Morgan told a group of reporters here.

“Realistically we do (stand a chance of winning). We came to India in 2016 and made it to the final. We had a similar squad during the World Cup in England this year.

“If we can build our momentum and gel together as a side, it will give us the best chance,” added the left-handed batsman.

Morgan, who will be playing in the third edition of the T10 Abu Dhabi League to be played in the United Arab Emirates in November and to be aired on Sony Pictures Sports Network, said like other teams, from now on their focus is on the World T20.

“Next year is pretty simple for me, continue on with both formats of the game (ODI and T20) as captain and the focus turns to Australia T20 World Cup in November next year and all of our energies will be going into that,” he said.

Following their shock first round exit in the 2015 edition of the ICC World Cup in Australia, England created a successful template that helped them lift the ODI World Cup this year.

Asked whether they would create another such template for the World T20, Morgan answered in the affirmative.

“It will be very similar because we have some exceptional T20 players and we will try to get them in the best possible position in our team and need to find out how it looks like,” he said.

“Over the last two years in particular, we have always seen T20 cricket as an opportunity to give young guys a game simply because our main focus has been the 50-over World Cup.

“Our strategy will change in the new year towards the (T20) World Cup. It is been long summer for some of us and some need rest. I think, in the immediate future, we might experiment a little bit. But next year, we will definitely be working towards building a strong team.”