The 34-year-old, who came to the crease on Friday, scored his eighth test century. 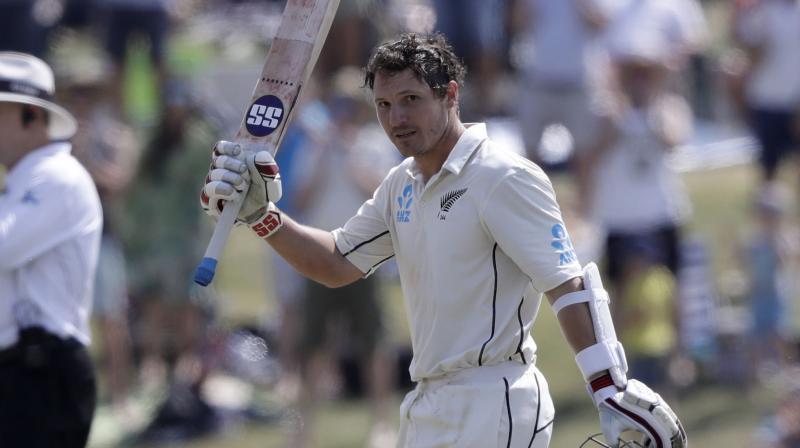 BJ Watling did on Saturday what he has done on numerous occasions before, thwarted an opposition attack from taking control of a test match and ensured his side stayed in the game. (Photo:AP)

Wellington: BJ Watling did on Saturday what he has done on numerous occasions before, thwarted an opposition attack from taking control of a test match and ensured his side stayed in the game.

The 34-year-old, who came to the crease on Friday, scored his eighth test century and combined for 70 runs with Henry Nicholls (41), 119 with Colin de Grandhomme (65) and an unbeaten 78 with Mitchell Santner as he anchored a superb turnaround.

Watling’s 119 not out was his second successive test century after he scored 105 not out against Sri Lanka in August, making him the first New Zealand wicketkeeper to score back-to-back centuries.

New Zealand finished the third day on 394-6, a lead of 41 runs after England had been dismissed for 353.

The hosts had been 127-4 late on Friday and in danger of conceding a large first innings deficit to the tourists when he strode to the crease.

Watling’s innings was remarkable for its lack of remarkableness.

Unlike the more feted batsmen such as Ross Taylor and Kane Williamson, Watling simply nudges and accumulates with a minimum of fuss and few highlight reel shots, something he recognised himself on Saturday.

“I just think I’m very limited and I try to play how I know works best for me,” he told reporters.

“I take a few shots away that some of the big boys do, and I definitely can’t.

“I try to stick to a game plan and hopefully it pays off.”

Such is his relative anonymity, few would remember that he has been part of two world record sixth wicket partnerships, both of which rescued his side from almost certain defeat.

The right hander scored 124 as he and Brendon McCullum put on 352 against India to save the second test in Wellington in 2014, which enabled the hosts to clinch the two-match series.

Watling walked in with New Zealand 94-5 in their second innings and still 148 runs from making the tourists bat again.

When he departed at 446-6, the game was essentially saved and McCullum well on his way to becoming New Zealand’s first test triple centurion.

The pair then produced an unbroken 365-run partnership, with Watling reaching his highest test score of 142 not out, that helped set up an unlikely 193-run victory.

Those partnerships highlight a career of stubborn rearguard fightbacks by Watling and it is this obstinacy that has drawn praise from team mates and opponents alike.

South Africa fast bowler Dale Steyn once described him as a player “who doesn’t want to give his wicket away”, while McCullum added Watling’s battle to try and save a test against West Indies in Trinidad in 2014 was typical of his character.

“The guy never complains, gets on with the job, goes out there and keeps for a hundred-and-something overs and goes out and bats for seven hours trying to save a test match for his country,” McCullum told reporters after the 10-wicket loss.

“It’s not the first time he’s done it. He’s done it on numerous occasions now.” And again on Saturday.