Watling was out for 205 soon after tea on day four at Mount Maunganui having stayed a marathon 668 minutes in the middle. 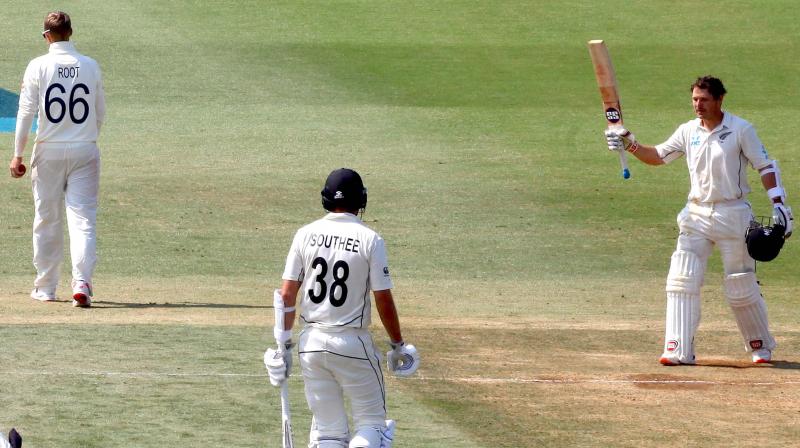 New Zealand declared their first innings at 615-9 on Sunday to give them a colossal 262-run lead over England following record-breaking performances by BJ Watling and Mitchell Santner. (Photo:AFP)

Mount Maunganui: New Zealand declared their first innings at 615-9 on Sunday to give them a colossal 262-run lead over England following record-breaking performances by BJ Watling and Mitchell Santner.

Watling was out for 205 soon after tea on day four at Mount Maunganui having stayed a marathon 668 minutes in the middle while Santner posted his maiden Test century with 126.

When New Zealand declared with just under four sessions remaining in the first Test they had easily surpassed their previous best against England of 551 for nine scored at Lord's 46 years ago.

The Watling-Santner partnership of 261 was a New Zealand seventh-wicket record, eclipsing the 225 set by Chris Cairns and Jacob Oram against South Africa 15 years ago.

The England players spent more than two days in the field and bowled 201 overs under a strong sun and tiring breeze, as Watling lifted New Zealand into a position of command from a vulnerable 197 for five in reply to England's 353.

The fightback started with a 119-run partnership with Colin de Grandhomme and then the record stand with Santner as the South African-born wicketkeeper batted England out of the game.

Watling and Santner resumed Sunday with New Zealand 394 for six and in a leisurely morning session they added only 58. But the batsmen opened up after lunch against the tiring England attack, plundering 138 in the session up to tea.

Watling, who was dropped by Ben Stokes on 27, set the pace on a wicket offering little encouragement for the bowlers as he moved well past his previous Test best of 142 set five years ago.

After going to tea unbeaten on 200, he added five more after the resumption before edging Jofra Archer and was caught behind.

Santner took a brutal approach to left-arm spinner Jack Leach, driving three times over the bowlers head for sixes before bringing up his century by turning Ben Stokes to fine leg for two.

He added a further six off Sam Curran before being caught trying to hit the England quick over the long-on boundary for a second time.

Santner's previous best was 73 against Bangladesh nearly three years ago.

As the New Zealand batsmen hit out, the England attack suffered with the promising Jofra Archer going for more than 100 for the first time in his fledgling career.

He finished with one for 107 while spinner Jack Leach took two for 153 and England's most successful bowler Curran had three for 119.