Day night cricket, played with a pink ball, is essentially a ruse to seduce fans — old and specially new — to savour the magic of the five-day format. 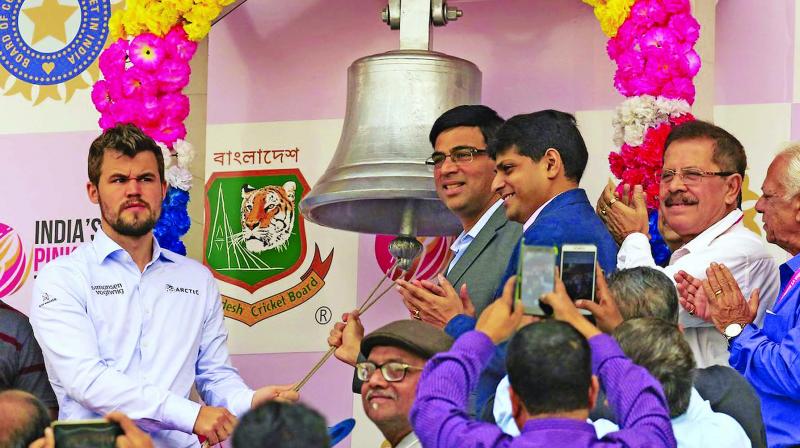 Saturday’s diabolical political developments took attention away from the first-ever day-night Test match at Kolkata where, unless there something as sensationally topsy-turvy as in Maharashtra happens, India should register a comfortable victory.

Yet, there is a worry. The utterly inept performance by Bangladesh (so far) raises the question whether just having day-night matches can help restore the pre-eminence of Test cricket. I fear not.

Day night cricket, played with a pink ball, is essentially a ruse to seduce fans — old and specially new — to savour the magic of the five-day format. It cannot retain its appeal as just a visual spectacle. That will fade quickly, unless the cricket played is interesting.

Fans in Kolkata were lured to the first-ever day-night Test by the uniqueness of the occasion. They thronged the Eden Gardens also to honour son-of-the-soil Sourav Ganguly, who has made this possible in such a short time.

The fact that there were powerful delegates attending the match, drawn from politics, business, entertainment and sport as well as the who’s who of Indian cricket — past and present — being featured in a parade  made it an event nobody would have wanted to miss.  However, if these same things were to be repeated, it will not hold similar value.

Spectatorship in Test cricket had eroded from the 1950s and 60s because of two reasons: paucity of time because of work pressure, aggravated by the fact that drawn matches had proliferated to a very high degree.

While complete diehards could endure the ennui of drawn matches, countless fans started getting switched off because not enough attempt was made by players and teams to achieve a result. They migrated to other sports or other forms of entertainment.

In this millennium the palate and preferences of spectators has changed from 60 years back. While results in Tests matches have happily become frequent, and more teams now play cricket (even the five-day format) which shows the growth of the sport, spectators want to see at least a decent contest between teams.

If the contest is terribly lop-sided, it does not sustain fan interest. This is the big threat to Test cricket, not just from other sports, but from within too, which explains the phenomenal success of ODIs in the past 50 years and in the last decade, from the even bigger success of T20 cricket.

To get all teams in a sport to be of equal talent and strength is obviously impossible. But for a sport to be relevant in the modern world, and therefore give spectatorship a continuous upward thrust, the teams that play it must be competitive.

True, all teams have periods of ups and downs. The highs and lows can sometimes last years. There are any number of factors that go in the making of a strong team: from culture, resources, talent supply, efficient administration etc.

But for a sport to thrive, the bulk of teams that play it must be of near equal strength to fuel spectator (and sponsor, broadcaster et al) interest. Teams must tend towards this otherwise there is the danger of being usurped by some other sport.

This has been a persistent danger to cricket, particularly Test cricket. For most of its history, the top 2-3 teams would be way ahead of the others. Since less than 10 countries played the longest format for over a century, the difference seemed even starker.

Even now, too few teams play the sport to paper over the threat. The chasm between the top 4 teams and the others remains wide. The problem now, of course, is that fans have countless other options on how to spend their time and money.

There is obviously no magic formula to bring parity between the teams in the eco-system. But this should concern the ICC and member boards for mutual survival. The day-night Test can catalyse interest, but is not long-term panacea. That can only be provided by the quality of cricket played.