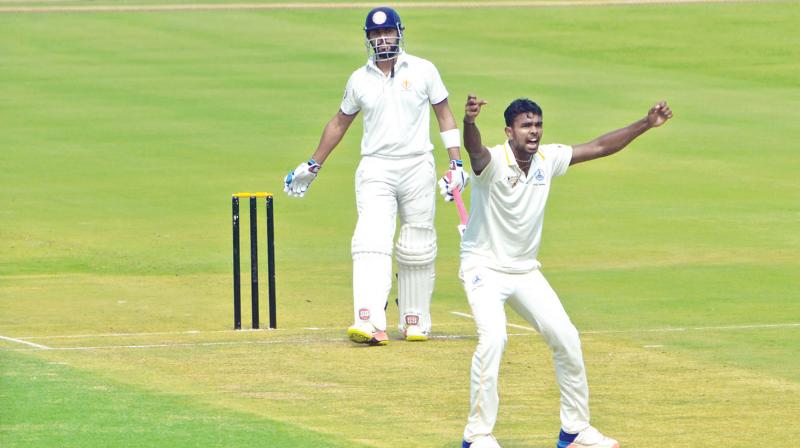 Visakhapatnam: Karnataka’s star-studded batting line-up, comprising the likes of K.L. Rahul and Karun Nair, collapsed spectacularly as the team folded up for 88 against Tamil Nadu on the opening day of their Ranji Trophy quarter-final clash here.

Nair (14) and Rahul (4), who belted a scintillating 303 not out and 199 respectively in the just-concluded home Test series against England, failed along with the rest of their team mates.

At the close of Day One, Tamil Nadu were sitting pretty with 111/4, gaining a lead of 23 runs over Karnataka. Dinesh Karthik and Abhinav Mukund were batting on 31 and 3, respectively.

Rahul was first to go after he was caught by B. Aparajith off Natarajan, when the scorecard read four.

Karnataka lost their next four wickets after adding 57 runs on the board.

Kaunain Abbas, who was the second batsman to walk back to pavilion, struggled to open an account even after he had faced 24 balls. He became the first victim of Crist after he gave a catch to Vijay Shankar, when the score was 10 in ninth over.

In reply, the script of Tamil Nadu innings was no different from Karnataka as they also lost three wickets for 33 runs, with their top-order — L. Suryaprakash (15), B. Indrajith (1) and Kaushik Gandhi (15) — marched back to the pavillion. Arvind Sreenath and Binny were the wicket-takers for Tamil Nadu.