This poses a serious challenge for Rohit yet is also splendid opportunity to silence skeptics who say he is temperamentally vulnerable. 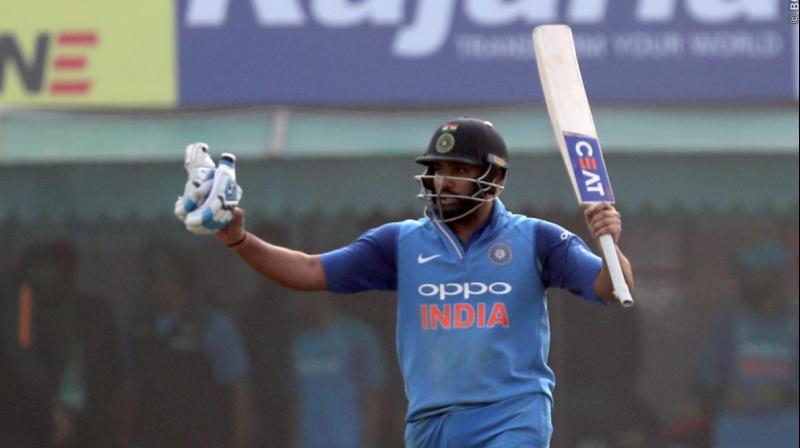 Here’s my message to Chris Gayle wherever he is currently in New Zealand:  Wake up and smell the coffee, Rohit Sharma is poised to displace you as ‘tonker-in-chief’ — or Mr Sixer if you prefer.

Indeed, Rohit’s stunning century in the second T20 international the other night at Indore would have given Gayle, who has littered grounds everywhere with his big hits, a complex.

While this was a devastating knock that left the Sri Lankans bruised, battered and beaten, it was executed with such felicity and style that pundits, critics and fans alike were moved to unstinted oohs and aahs.

Runs flowed from Rohit’s blade in a torrent. He reached his century in just 35 deliveries, equalling the record for the fastest in T20Is. Sixes and fours came fast and went far, but the assault, though it caused mayhem, hardly appeared brutal.

This was not a naked display of power-hitting. If the run-scoring had not been so frenetic, I would have ventured it was an elegant display.  Indeed, a substantial part of the innings was defined by finesse.

What distinguishes Rohit from most big hitters is gift of timing. And this is only possible because he is a superb judge of length. His repertoire of strokes is wide, virtually 360 degrees, and he has a keen understanding of how the field is placed.

Add to this ability to play late, fluid and unfettered movements of feet and arms helping the bat describe beautiful arcs and you have not just a match-winner, but also a peerless stylist.

Rohit hit a purple patch in recent weeks making the Sri Lankans pay heavily. Apart from the T20 century, he had a double century too (his third) in ODIs and an unbeaten century in Tests.

But while those in limited overs cricket helped fetch him records and establish him as among the top 5 batsmen in the world in these formats, I believe the Test ton was the more important at this stage of his career.

Where his career in T20s and ODIs has flourished, his Test appearances have been staccato. Starting off with centuries in his first two Tests, he has struggled to retain his place, which has agonized those who swear by his talent.

But for the team management playing six instead of five specialist batsmen in Tests against Sri Lanka as preparation for the tour of South Africa, Rohit would possibly not have made it to the playing XI.

Success against the Sri Lankans now makes him an automatic inclusion for at least the first two Tests against South Africa. India will obviously hedge with an extra batsman in conditions loaded in favour of the home team fast bowlers.

This poses a serious challenge for Rohit yet is also splendid opportunity to silence skeptics who say he is temperamentally vulnerable. He looks in seriously good nick currently but how he fares in South Africa will determine his Test future.

Vidarbha’s fairytale run
Matches against Sri Lanka — across formats — have frankly been too one-sided to hold interest. Vidarbha reaching the Ranji Trophy final — for the first time — has been the most dramatic and important story of this home season in my opinion.

Winning the humdinger semi-final against mighty Karnataka was an example of Vidarbha’s commitment. But the more significant aspect is that this is symptomatic of how cricket’s power equation has changed in the country.

True, Delhi is in the final, but perhaps the most exciting and compelling cricket this season has been played by Kerala and of course Vidarbha. Neither would have featured in anybody’s list to even reach the quarter-finals.

Indian cricket is no longer dependent only on traditional centres for talent. This is emerging from everywhere: perhaps more and better from cities and associations not renowned for their cricket prowess.

India’s bowling attack across formats reflects this adequately. Barring Ashwin (Chennai) and Ishant Sharma (Delhi), all other bowlers are from smaller cities and associations. This is beginning to be felt among batsmen too going by the bench strength.

Clearly, there is greater hunger to succeed in less recognized cities/centres. Prospects of livelihood and fame, boosted in no small measure by the IPL, are redefining the profile of the Indian cricketer. And making Indian cricket richer!