India have not tasted triumph in a global tournament since lifting the 2013 Champions Trophy. 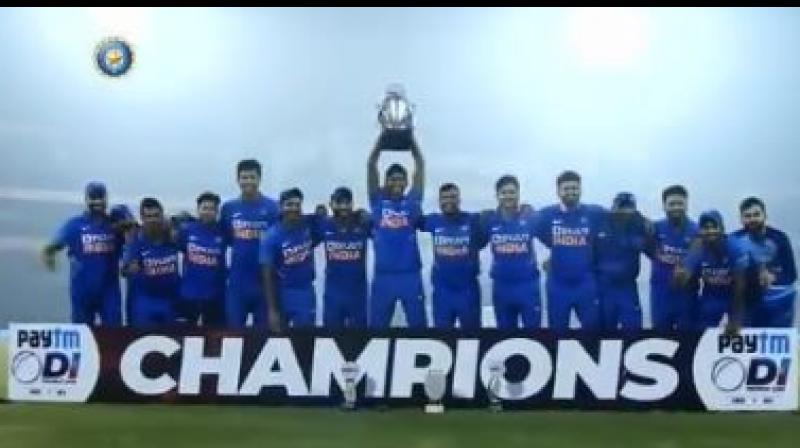 India will keep pursuing success on cricket’s global stage, captain Virat Kohli has said after his team capped 'a beautiful year' with a one-day international series win against the West Indies at Cuttack on Sunday. (Photo:BCCI)

MUMBAI: India will keep pursuing success on cricket’s global stage, captain Virat Kohli has said after his team capped 'a beautiful year' with a one-day international series win against the West Indies at Cuttack on Sunday.

India retained their position at the top of the International Cricket Council’s rankings for test cricket while they finished second behind World Champions England in the 50-over format.

But India have not tasted triumph in a global tournament since lifting the 2013 Champions Trophy under Mahendra Singh Dhoni and exited this year’s 50-overs World Cup with a semi-final defeat to New Zealand despite topping the group stage.

“Well, it’s been one of the best years for Indian cricket, to be honest, apart from playing the cricket that we played for half an hour in the World Cup,” Kohli said at the presentation ceremony on Sunday after India’s series win against West Indies.

“We’ll have that vision in place, but I think apart from that, the way we’ve played, the brand of cricket, it’s been wonderful to be a part of it.”

After taking over as the chief of the country’s cricket board in October, former captain Sourav Ganguly also underlined the need for India to stamp their authority on global tournaments.

India will get their next opportunity to end the wait at the Twenty20 World Cup in Australia next year.

Kohli’s limited-overs deputy, Rohit Sharma, will be a vital cog in the wheel for that campaign after finishing 2019 with 2,442 runs across formats, the most by an opening batsman in a calendar year.

The right-handed batsman, who scored seven ODI centuries in 2019 including five during the World Cup in England, was adjudged the player of the series against West Indies.

“I should be grateful of the year I’ve had. A World Cup victory there would’ve been nice,” Rohit said. “But as a team, we played some good cricket throughout the year whether in red-ball cricket or white ball cricket.”