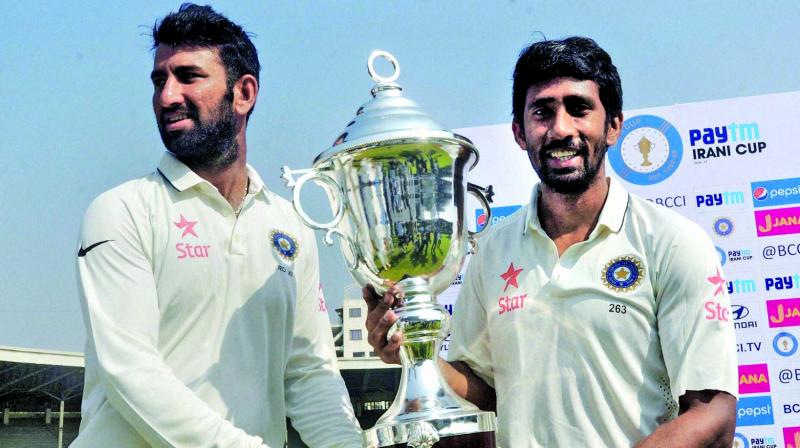 Mumbai: Wriddhiman Saha converted his flamboyant knock into a double ton to help Rest of India retain the Irani Cup here on Tuesday. Saha scored an unbeaten 203 and Pujara made 116 as they shared 316 runs for fifth wicket in unbroken match-winning stand to guide their team to six-wicket win over first time Ranji champions Gujarat.

The partnership was just 11 runs short of the best ever Irani partnership between Ravi Shastri and Praveen Amre in the 1990-91 season for Mumbai. RoI won it for the 27th time in 55 Irani Cup matches and 15th time in last 19 editions. Rest of India chased down 480-odd at the same venue last year and they repeated it again by scoring 379 comfortably despite conceding a 132-run first innings lead.

After rescuing their side from a precarious 63/4 to add 203 runs for the fifth wicket on Monday, Saha and Pujara carried on to pile up another 113 runs and complete the chase before lunch. It was also the highest first-class score for Saha. He reached his maiden double ton in 270 balls with a boundary off Karan Patel. It was the first double ton by any wicket-keeper batsman in this tournament and eighth overall. Pujara completed the win with a boundary off Hardik Patel while using his feet probably for the first time.

RoI started the day at 266/4 with Saha unbeaten on 123. The Bengal stumper continued to show aggression on Tuesday morning and took on the bowlers. He added the slog sweep to his scoring range after mastering straight boundaries. He welcomed Hardik with two boundaries and a six.