Jemimah is ready for the challenge

The 17-year old Mumbai girl is eyeing her debut as she travels with the women’s cricket side to South Africa. 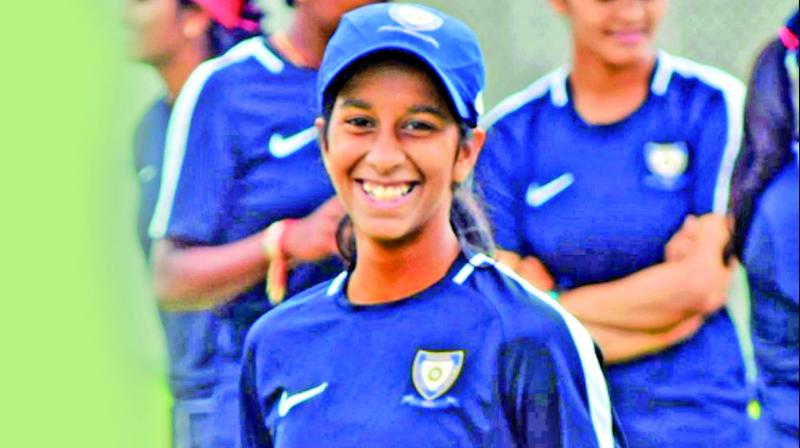 At first, she took a quick look around the room, taking in the number of people in the room and then decided how many questions might come her way.

She walked into a room full of reporters and grabbed a seat which had just been vacated by her captain Mithali Raj a few moments ago. Without even uttering a single word, the 17-year-old Jemimah Rodrigues’s wide smile amply revealed her excitement at being part of the same team as Mithali, who she has always looked up to.

At first, she took a quick look around the room, taking in the number of people in the room and then decided how many questions might come her way. The top-order batswoman has probably dealt with more pressure on the field and her admirable confidence echoed in her answers.

Little did the teenager know that Mithali had called her the “future” of Indian Cricket just moments ago in the same room along with calling her the best fielder of the side. Jemimah was amazed at being able to practice at the same nets as the World Cup runners-up at Sharad Pawar Indoor Cricket Academy, Bandra Kurla Complex (BKC). The team departed for South Africa to play three one-dayers and five T20s on Wednesday morning. The first ODI is scheduled for February 5 in Kimberley.

The wait is over

Springing up after her double century against Saurastra helped the Mumbai side notch up a 285-run victory in a 50-overs match, Jemimah had already knocked on the selector’s doors. But another substantial performance was demanded from her on the senior level. The Bandra-girl was already waiting in anticipation for this opportunity for a year and it landed in her lap during the Challenger’s Trophy, where she scored 179 runs in three matches.

“I have been working hard for many years. I had good performances with the Under-19 but I could not perform at the senior level. This year, I was working even harder with my dad and my coaches. I tried to improve in the areas where last year I was failing. I was preparing for the Challengers (trophy) because I knew my performances in Under-19 back me up and Challengers will be the main step.  If I do well I would make it to the Indian team,” she added.

Her confidence is backed by rock-solid performances on the cricket pitch. Before the double-ton, Jemimah scored two consecutive hundreds, including one in the season opener against Gujarat. She scored 178 off 148 balls but was left feeling upset as she missed the 200 mark by 22 runs.

It is reasonably fair for Mithali to name her as the future even though she has not yet faced a single international delivery in her cricketing career.

For a 17-year old teenager, facing the press in India’s blue colours is neither usual nor simple. She was little edgy. “Yes of course there’s a bit of nervousness (in her first ever press conference). I am really looking forward to this SA tour. It’s my first tour and being a part of the Indian team is really good. Everyone here has really supported me. They’ve not made me feel like I am the new girl and we have gelled really well,” she said.

“The atmosphere is great and all of them are really supportive, they don’t make me feel like I am the young one. The tips I receive are different from each of them. When I am batting, Smriti Mandhana and Punam di tell me if I am playing the ball too early,” she further added.

Her athletic career is not just limited to cricket. Jemimah is also a national level hockey player but she has performed more wonders with the bat and the ball than the rest. Her debut for Mumbai’s Under-19 was handed to her when she was a 12-year old and now she is the captain of the senior side.

It’s not totally unjust to compare her with Sachin Tendulkar because of her age and talent. Who knows if the women have a schedule like the men, she could do the same. Nevertheless, the former Indian batsman visited the squad on Tuesday which was one day before they departed to South Africa. Jemimah was stunned by his presence at the BKC ground.

“I think meeting Sachin sir was an ‘Aww’ moment for each of us. He is one of the best examples of a great batsman and a humble human being. He spoke to each one of us, made us feel comfortable and gave us tips. He gave us a lot of confidence,”she said.

The same Indian women’s squad that finished runners-up in the World Cup is travelling for the series. The teenager will have to fight for a place in the starting eleven. Usually playing in the top-order, Jemimah said she will play wherever and whenever the team need her.