Pakistan will now play the winners of Friday’s quarter-final between India and Bangladesh in the second semi-final here on January 30. 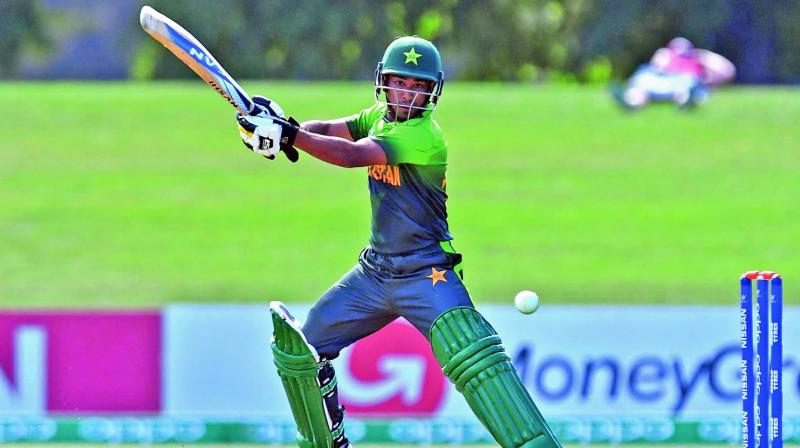 Pakistan’s Ali Zaryab in action in their U-19 World Cup match against South Africa on Tuesday. — ICC

Christchurch: Ali Zaryab hit a composed 74 to complement the hard work done by pacers Muhamad Musa and Shaheen Afridi as Pakistan notched up a three-wicket win over South Africa in the ICC U-19 World Cup Super League quarter-final here on Tuesday.

Left-handed Zaryab compiled a cautious but attractive 111-ball unbeaten knock, with five fours, that took two-time champions Pakistan to their target of 190 in 47.5 overs after the pace-duo of Musa and Shaheen had shared five scalps to help restrict South Africa to 189/9.

The victory over the 2014 champions means Pakistan will now play the winners of Friday’s quarter-final between India and Bangladesh in the second semi-final here on January 30.

The 2004 and 2006 champions have to be thankful to Zaryab, who was not perturbed even as the Asian side were reduced to 111/5 after all-rounder Jason Niemand gave South Africa a glimmer of a hope with the wickets of captain Hassan Khan and Muhammad Taha.

But in Saad Khan (26, 62b, 3x4), Zaryab found an able partner and added 65 crucial runs for the sixth wicket, which proved to be decisive in a low-scoring affair.

This was Zaryab’s third half-century in the tournament and second successive player of the match award after his 59 in another low-scoring match against Sri Lanka had ensured Pakistan not only qualified for the Super League but eventually topped their group ahead of Afghanistan.

Earlier in the day, Pakistan fast bowlers Musa and Shaheen justified Hassan’s decision to bowl first as they made deep inroads into a strong South Africa’s batting line-up.