Watch: When Pujara left Kohli and co in splits

Pujara took 54 balls to open his account in the 1st innings of the 3rd South Africa versus India Test. 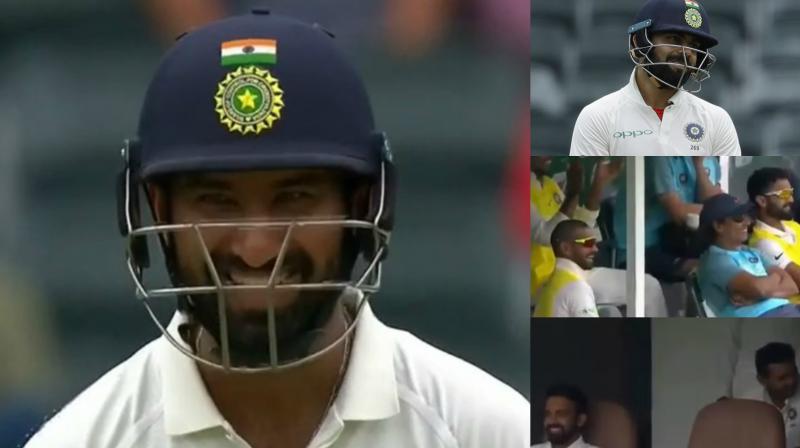 Indian cricketers, including skipper Virat Kohli, could not hold back their smile as Cheteshwar Pujara took 54 balls to open his account. (Photo: Screengrab / AFP)

Like always, he did not look in any hurry and after the twin run-outs in the last Test, he did not seem in any rush to show he has improved his running between the wickets skills. Safety first, runs later was the order of the day for him; more so, after Murali Vijay and KL Rahul failed with the bat at the top.

However, there was no shortage of emotions as Pujara batted. There was a wry smile from him and Virat Kohli, who was batting alongside Pujara, a generous round of applause and laughter from the dressing room and the players, who were sitting in the dug out.

And lest we forget, a solid dose of appreciation, fun, sarcasm and laughter on social media as Pujara went about his business.

Kohli: Is the match going on at an SBI branch?

Kohli: Then why the hell is it taking you so long to open your account?#SAvIND

Pujara costs 75L in IPL, just in case you were wondering! #IndvSA

Pujara is like a person who walks into a bank without an Aadhaar number.
Just can't open his account.

Couldn't accuse Pujara of having one eye on the IPL auction! #SAvIND

Pujara, at one point of time, was close to break an Indian record of consuming highest number of balls before opening his account in Test cricket. But he has pushed that record-date for some time later. For the records, Rajesh Chauhan took 57 balls to open his account during the third India versus Sri Lanka Test in Ahmedabad in 1994.

However, as soon as he opened his account on the 54th ball, Pujara could not hold back his smile, Indian dressing room cheered for him and Twitter, like it always does, was on a roll.