Kuldeep Yadav stars as Australia all out for 300 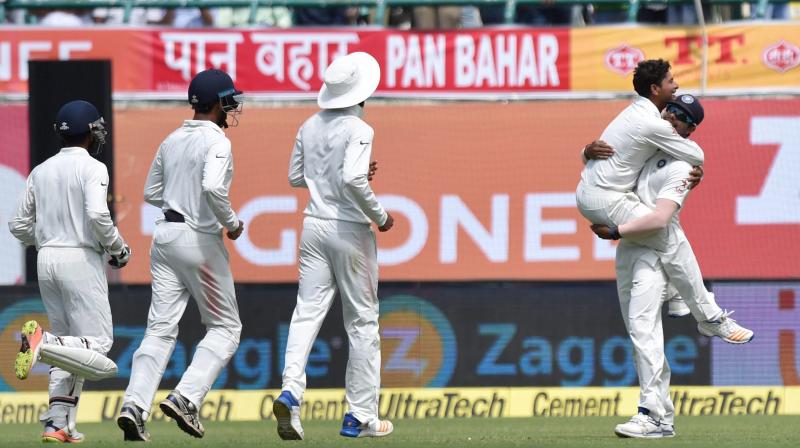 Debutant Kuldeep Yadav scalped four wickets as Australia failed to cash in on Steve Smith’s hundred and were all out for 300. (Photo: AP)

Dharamsala: Kuldeep Yadav (4/68), on Test debut, starred as India turned the tables on Australian side by scalping nine wickets in the last two session on Day one of the fourth Test here on Saturday and dismissed Australia for 300.

KL Rahul and Murali Vijay, who had to bat out an over before stumps, did not let Australia enjoy some last-minute happiness as India kept all the wickets in tact before the close of play.

The Indian youngster secured his first Test wicket after David Warner edged one to the slip. Then, he dismissed Peter Handscomb with a peach of a delivery. The Australian batsman was done in by the drift as the ball went through Handscomb’s defence to disturb the timber.

Glenn Maxwell was the next man to get out as he was bamboozled by Kuldeep’s wrong’un.

Umesh Yadav, meanwhile added one more wicket to his account, after he removed Shaun Marsh. And while Umesh and Kuldeep rattled Australia, the visitors were pushed on the backfoot on the stroke of tea as R Ashwin dismissed Steve Smith after Ajinkya Rahane took a brilliant low catch in the slip.

Ravindra Jadeja and Bhuvneshwar Kumar scalped a wicket each while Shreyas Iyer starred in the field to run out Steve O'Keefe.

Earlier, Smith and David Warner have pushed India on the backfoot as the Australian duo put up an unbeaten 121-run partnership as the visitors scored 131 runs in the first session on Day one of the fourth Test here on Saturday.

Warner, who was dropped on the first ball by Karun Nair, brought up his first fifty of the series.

While India managed to dismiss Matt Renshaw in the second over as Umesh Yadav disturbed the timber, the experienced Australian duo of Smith and Warner feasted on a beautiful batting wicket in the picturesque Dharamsala.

Australia won the toss and elected to bat as Virat Kohli, who sustained a shoulder injury in the Ranchi Test, was ruled out of the final Test.

Ajinkya Rahane is leading the Indian side which has made two changes to its playing XI from Ranchi Test as Kuldeep Yadav has been handed his Test cap and Bhuvneshwar Kumar has been drafted into the side to replace Ishant Sharma. Australia have retained the same team which took field in the third Test.